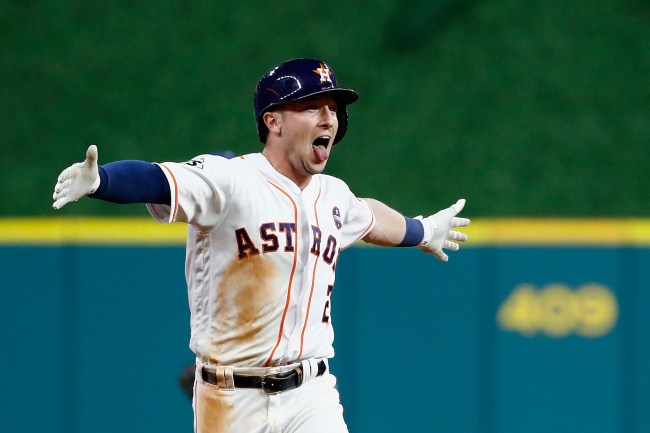 Alex Bregman is one of the best baseball players on the planet, and is blessed with seeing the game differently — which helps him be so successful. Sure, the Houston Astros third baseman is jacked and blessed with power, too, but greatness in sports often comes from a mental edge, not a physical one.

A former No. 2 overall pick by the Astros in 2015, Bregman had the fast track to the majors, reaching the big leagues at the ripe old age of 22. Since then, all he’s done is bash 99 homers, earn a couple All-Star appearances and finish runner-up in the 2019 AL MVP race in his first four MLB seasons, so it’s safe to say the guy knows a thing or two about being really good at baseball.

Unfortunately, Alex Bregman also happens to be really good at sign-stealing, which, as we all know, helped the Astros win the World Series in 2017. While the slugger wasn’t believed to be the main culprit behind the strategy, the fact that he’s one of the faces of the franchise and didn’t put an end to it sort of hurts his reputation as a great player. Plus, the the fact that he previously said he thinks the unwritten rule of beaning a batter is his favorite way MLB players police themselves — something plenty of Astros players should expect this upcoming season — just looks bad right now.

Something else that stains Bregman’s superstar status? The fact that he was sign-stealing as young as the age of 12, when the now major league star was the bat boy for the New Mexico baseball team.

As part of a feature with Bleacher Report in 2019, here are some of the details about Alex Bregman stealing signs to gain an advantage for the Lobos back then — which is part impressive and part telling about the lengths the third baseman would go to become successful.

“I was a little cocky piece of shit as a kid who’d tell them I’m gonna be in the big leagues, and they’re like, ‘Yeah, all right, kid,'” Bregman says.

It gave him a taste of college baseball. He loved riding the busses. Within the first few games of being the team’s bat boy, Alex began to pick up the signals of other teams.

“Hey, I got their signs,” Alex said to the Lobos coaching staff.

The next pitch, Alex said, would be a fastball.

The next pitch was gonna be off-speed, he said.

Here comes the changeup, he said.

Alex explained his secrets, and the coaches observed. “You’re right,” they said. “You got ‘em.” The Lobos ended up sweeping all the games they played that weekend in Arizona. “They never found out,” Alex says today. “Who thinks the bat boy has the signs?” The stories circled the Albuquerque baseball scene before Alex started high school.

New Mexico has never been a baseball hotbed, so Bregman took it upon himself to be memorable, on and off the field. He was always smaller, less athletic, not as strong as his competition at national showcases, such as Team USA’s U18 team, so he talked to players and coaches about his background, and won them over with extraordinary effort on the field. It was either make himself known or risk being looked over.

While that seems like harmless fun when Alex Bregman was just a 12-year-old who wasn’t making millions in the majors, it’s not so cute now that the Astros cheated their way to a World Series title a couple years ago, and are being labeled as the biggest villains in the sport in about a century.

Bregman has previously mentioned how his ambition is to be “the LeBron James of baseball,” which is the highest standard. Given his link to the Astros’ sign-stealing scandal, it doesn’t exactly help his cause to make that happen moving forward, because his reputation has been nailed right now with all this controversy.