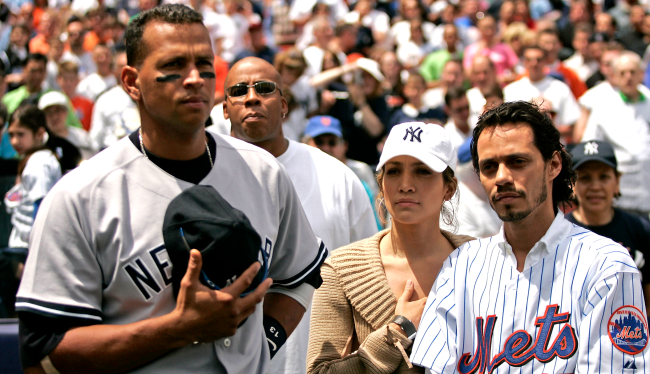 For 10 years, from 2004 to 2014, singer Marc Anthony was married to pop icon Jennifer Lopez. They had two kids together, twins, and still appear to be rather close friends. The couple even at one point bought a minority stake in the Miami Dolphins together.

Which is why folks on the internet are getting such a kick out of Anthony’s recent response to an OK magazine report which claimed Alex Rodriguez believes Lopez “might start to miss what they had together.”

Alex Rodriguez insists he’s in a great place since his split from Jennifer Lopez, but an insider claims he continues to carry a torch for his former fiancé.

Rodriguez, 46, and Lopez, 52, who called it quits last April after four years together, are still working to untangle their joint business holdings, “which gives him a chance to reminisce with her,” says the insider.

“They’re mainly going through their respective lawyers, but they’ve had some one-on-one talks, and Alex always makes a point to compliment Jen.”

Does Alex Rodriguez really think he will get back with Jennifer Lopez at some point?

The source added, “Jen is civil to Alex, but she’d prefer to stick to business and sort out the financial stuff as soon as possible. She doesn’t want to be enemies, but she’s not looking for a deep friendship, either.” A-Rod, however, isn’t giving up hope, adds the insider.

“He believes Jen might start to miss what they had together, but she’s ready to put him in her rearview mirror.”

Related: Alex Rodriguez Gets Mocked For Posing With Car He Once Gave To Jennifer Lopez

Marc Anthony’s take on the matter?

The last time we saw him he was dancing with Kathryne Padgett, a National Physique Committee (NPC) competitor and nutritionist from Dallas, Texas at the Green Bay Packers game versus the San Fransisco 49ers in the Divisional Round of the NFL Playoffs.

Lambeau is the place to be for A-Rods 🥶

Before that, Alex Rodriguez was bragging about having “Big D Energy” after taking a vacation with NFL on CBS sideline reporter and Golf Channel host Melanie Collins.