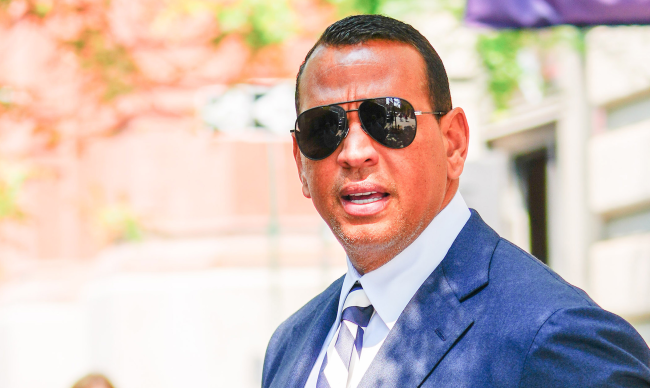 Alex Rodriguez had himself quite a time last week, stalking vacationing in the same place his ex-fiancee Jennifer Lopez and Ben Affleck were also on vacation.

A-Rod spent much of the week on a yacht with his famous friends visiting St. Tropez, Monaco and Ibiza in celebration of his 46th birthday.

He appeared to spend most of his time hanging with former NFL player Eric Decker and his country musician wife Jessie James Decker, as well as sports reporter Melanie Collins.

Collins, 35, a broadcaster for NFL on CBS, and Rodriguez are “just friends,” according to reports, but did spend a lot of time alone together on the trip. A trip in which Rodriguez reportedly banned the playing of any of Jennifer Lopez’s music.

A-Rod was seen out in Spain with Melanie Collins. https://t.co/NpwEZjqSz0

“The breakup was ugly and still hurts which is why Alex doesn’t want to hear her voice when he is out trying to enjoy himself,” said a source.

“Can you imagine how embarrassing it would be for Alex to be partying and suddenly her music starts to play?” asks a pal.

“You can’t blame him for wanting to make sure that doesn’t happen.”

Hampton’s insiders add that venues out East have been scrambling to make sure Jen’s music isn’t on rotation when Alex is around. “If you really want to make Alex happy, play Mariah,” laughs a friend.

Upon his return to the States and his work for Sunday Night Baseball, A-Rod posted a photo of himself on his Instagram Story with the caption, “Stepping out with the big D energy. Determined, darling & dapper AF.”

A-Rod Is ‘Stepping Out With Big D Energy’https://t.co/2iluXWFBIR

So, now the question becomes, especially when it has to do with A-Rod, if you have point out that you’re feeling some big D energy, are you really feeling big D energy?