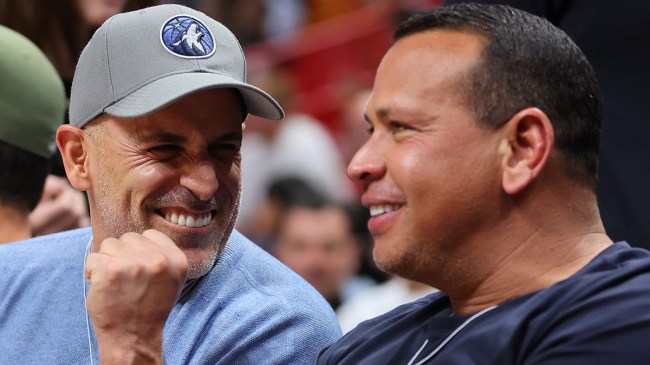 It’s been around a year-and-a-half since Alex Rodriguez and Jennifer Lopez unexpectedly called it quits following a two-year engagement in a crippling blow to the kind of people who get emotionally invested in the personal lives of rich celebrities they’ve never met.

Given the nature of their relationship, it’s impossible to know exactly what led to J-Lo deciding to back out of it. With that said, there was one report that suggested her decision to get back on the market partially stemmed from A-Rod’s interest in purchasing the Minnesota Timberwolves—an acquisition he apparently turned his attention to after Steve Cohen outbid the couple in his successful quest to become the owner of the New York Mets.

A lot of guys opt to buy a new set of golf clubs or a sports car when they find themselves grappling with the type of crisis the retired baseball star found himself facing in the wake of the breakup. However, Rodriguez apparently decided there was no better way to bounce back than becoming the part-owner of an NBA franchise, as he and Jet.com co-founder Marc Lore inked a deal worth an estimated $1.5 billion that put the duo on track to become the controlling owners of the T-Wolves at some point in 2023.

Rodriguez may not have Serial Tech Entrepreneur Billionaire money, but he did manage to rake in over $450 million in contract money alone over the course of his time in the MLB on top of the cash he earned thanks to the endorsement deals he inked during his playing days and the various television gigs he’s landed in retirement.

However, if The New York Post is to be believed, A-Rod has hit a bit of a snag that’s reportedly making it difficult for him to live up to his end of the bargain.

The outlet reports the aspiring owner has encountered some solvency issues that have allegedly resulted in him “scrambling” to get the cash he needs for the installments that need to be paid before the deal is finalized—including a $250 million down payment Lore may have had to shoulder the bulk of:

“Lore now has a roughly 13% share in the Timberwolves while A-Rod has amassed a mere 7%.

‘I wouldn’t be surprised if A-Rod becomes a subservient No. 2 to Lore,’ a source said, predicting that Lore might end up buying more than half and controlling the team.'”

It’s worth noting Lore said he “couldn’t imagine having a better partner” when asked about the veracity of the rumors, but the fact that he neglected to confirm or deny them certainly won’t help quell the speculation.