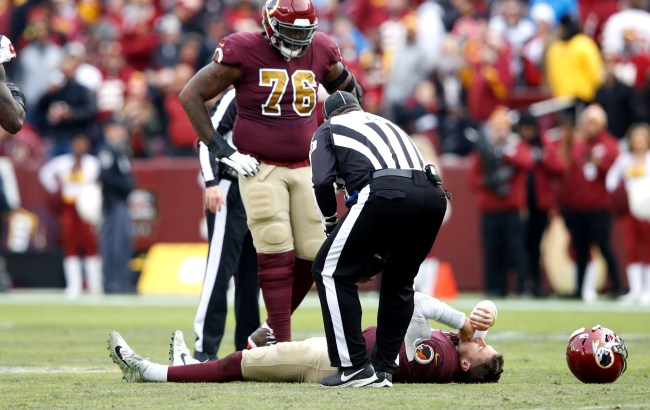 Anyone who saw what happened to Washington Redskins quarterback Alex Smith when he broke his leg in a game versus the Houston Texans in 2018 (33 years to the day Joe Theismann horrifically broke his leg) knows just how traumatic an injury it was.

Two months following the injury, Smith made his first public appearance wearing a frightening-looking apparatus on his damaged leg.

17 (!) surgeries later, Smith still believes that he can come back and play quarterback for Washington in the 2020 NFL season.

The Redskins will have paid Smith $31 million for this season, in which he did not play, and next. New head coach Ron Rivera has already gone on record as saying he is looking forward to seeing Smith battle Dwayne Haskins for the starting job in 2020.

Saturday on ESPN’s Outside The Lines, the 35-year-old Smith spoke with Jeremy Schaap and revealed that despite his lofty goals, he is more than happy “just to be alive.”

If you want to see how severely Smith’s leg was broken have a look at this photo.

“I had a pretty serious infection … they had a lot of complications with it, a bunch of surgeries,” Smith recalled. “That ended up leading to basically a limb salvage surgery for my leg, to save my leg. Faced with the decision to amputate or limb salvage and elected obviously to try to save my leg.”

After developing a septic infection, Smith said, “I don’t remember much… for a few weeks. I had quite a few surgeries in a row, debriement, trying to get the infection under control. Next thing I remember is waking up several weeks later faced with the decision of amputation or limb salvage at that point.”

Smith, who was unaware at the time of how serious his situation was, due to being sedated, admitted, he is “very much lucky to be alive, very lucky to still have my leg.”

After all of that, Smith still expects to be out there on the field next fall for the Redskins.

“There’s enough there that I can go out there and play … Knowing that, yeah, failure is a possibility … I need to prove that I can come back and play quarterback in the NFL, and if I can do that, that would be great and it’ll get figured out.”