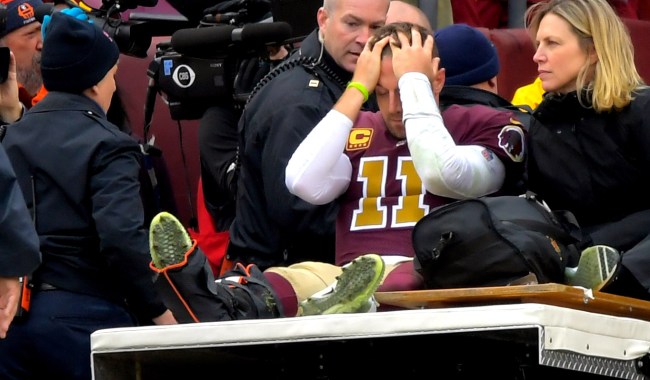 Anyone with a pair of functioning eyeballs knew that the broken leg Washington Redskins quarterback Alex Smith suffered (on the anniversary of Joe Theismann’s snapped leg no less) was a catastrophic injury.

The fact that there was even talk of a small chance of amputation of Smith’s leg as he battled a serious infection related to the surgery he had on his broken fibula and tibia only served to highlight just how bad the injury was.

The nasty-looking metal apparatus called an “external fixator” that surrounded Smith’s leg as he slowly reappeared in public was certainly another.

The last report the media had on the number of suregeries it took for Smith to finally make it back on to the field with his wife prior to a Redskins game in August was six.

Call me crazy, but six surgeries on a broken leg sounds like a lot of surgeries. As it turns out though, that number was WAYYYYY low.

According to the Washington Times…

That is what Smith told an invited audience of mostly medical professionals attending an Inova Sports Medicine event on Oct. 2 in Fairfax, Virginia, — 17 surgeries, according to someone in attendance who asked not to be identified.

They said there was a “gasp” from the crowd when Smith revealed he had 17 surgeries on the broken leg, the person said.

The 17 surgeries is a dramatically different figure than the six the NFL Network reported in December. Those nearly half-dozen operations were reportedly part of an effort to remove tissue after Smith developed an infection following the operation he had to repair the broken fibula and tibia he suffered in that 23-21 loss to the Texans.

That Smith is even walking today is pretty impressive, but even at age 35, he says he is still trying to make it back to the NFL.

In fact, The Athletic reported on Tuesday that Smith was on the practice field!

As the team’s open locker room closed on Monday after, The Athletic happened to see Smith on the field, throwing a variety of routes and practicing his drop back with two team officials. For 15 minutes, he threw out routes, deep balls, short throws, passes that went over 30 yards, and more. Smith didn’t put a great deal of weight on the mending leg but was still able to loft the ball up and get a lot of air under his throws.

Bro is serious. Then again, why would Smith retire when the Redskins still owed $31 million for this season and the next?