Alex Smith Made An Appearance On The Field Before Monday’s Game, But It Was His Wife Elizabeth Who Went Viral 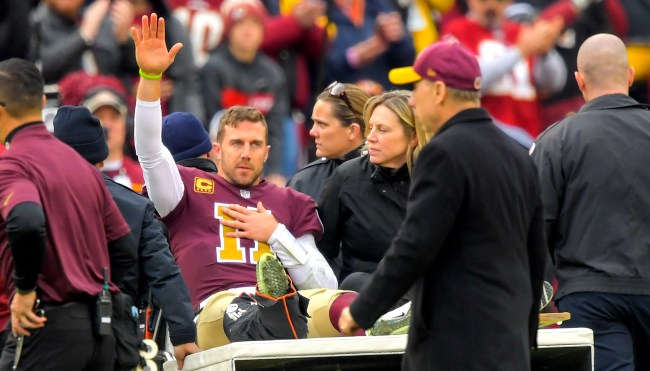 Washington Redskins quarterback Alex Smith still seems hell-bent on returning to the field after suffering one of the more horrific leg injuries the NFL has ever seen.

After battling a serious infection in his broken leg, spending four weeks in the hospital, and wearing a very severe-looking metal apparatus on his leg for months, Smith is back walking under his own power, even throwing some footballs around at training camp earlier this year.

In another sign of how far Smith has come in his recovery (he had the metal brace removed in July), he showed up for Monday night’s Redskins game versus the Bears at FedExField, the same place he suffered the devastating injury 10 months ago.

While he didn’t look like he was ready to try to evade a blitzing linebacker anytime soon, the 35-year-old was walking without his crutches.

Alex Smith walking on the field with his wife before tonight's game against the Bears. Smith, who broke his leg last November, not using his crutches #Redskins @nbcwashington pic.twitter.com/7iy6Rb29Tq

In August, NBC Sports reported that Smith admitted he has struggled with the rehab, but has had a lot of good support as he tries to make it back.

When asked about what has helped him fight through everything he’s had to endure since suffering the injury, he emphasized his support system, specifically his wife.

“First off, I knew I had an amazing wife, but this has really proven it for me,” he said. “She has shouldered the load, not only what I’ve had to go through, but the family. I’m obviously very grateful for her and our entire support system.”

Besides his wife, the Redskins organization as a whole has continued to help their quarterback during his recovery process.

“[The team has] been there for me,” Smith said. “This has been such a unique situation, and the way they’ve handled it, everybody has been there for me and allowed me to go about my business. It’s been really great. It’s nice to finally be back in the team environment, around the guys. I’ve missed that for quite a while now.”

Speaking of his wife Elizabeth, it turned out that Smith walking back onto FedExField for the first time since his injury wasn’t what ended up going viral. It was her.

I only see one thing and it ain't alex

I mean damn! I used to feel sorry for him... but nahhhh. Not feeling sorry not a damn bit. Damn!

I thought you said Alex Smith was in the video. Where? pic.twitter.com/HeI7hFSJII

Didn't even see him there

is she going to the club tonight?

He looks to be doing just FINE

If you're gonna make a post about Alex Smith, you should post a pic with Alex Smith in it. I see no Alex Smith here

Sorry, Alex who? All I see is that lady holding some lucky dude’s hand...

........Oh, also it is great to see your rehab progressing nicely Alex. pic.twitter.com/vEInYk0mcE