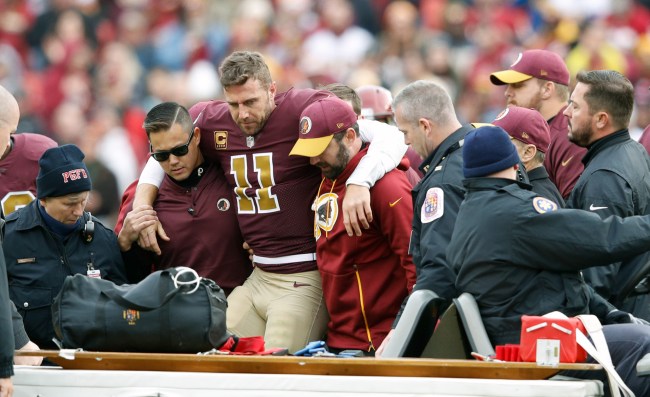 After seeing the carnage that remained after Alex Smith snapped his right leg last season on the same day as another Redskins QB (with the same number as Dwayne Haskins!), only 33 years later, one wouldn’t blame him if he decided that he’d had enough of tossing the ole pigskin around.

One, however, might be surprised to see Alex Smith not only up and around, though still rocking that frightening external contraption on his leg six months later, he was at Redskins OTAs tossing that ole pigskin around like it’s no big deal.

Just saw Alex Smith coming out of weight room at the team facility. Still has the cast around lower calf and the stabilizer holding it in place, but he’s walking and moving well. In good spirits and everything. #HTTR

While Smith, now 35, probably won’t be playing for the Redskins again anytime soon (or any team for that matter), especially with Washington drafting Haskins, he will still cost them $20.4 million worth of salary-cap space next season and $21.4 million in 2020, even if he doesn’t play.

One storyline to follow for 2019: The #Redskins are planning as if they won’t have QB Alex Smith next season, sources say. They believe he’ll miss the entire season with his broken leg issues and are acting accordingly. If he’s ready, they will be pleasantly surprised.

That being said, it’s still very cool to see him moving around and in such good spirits back around his teammates.