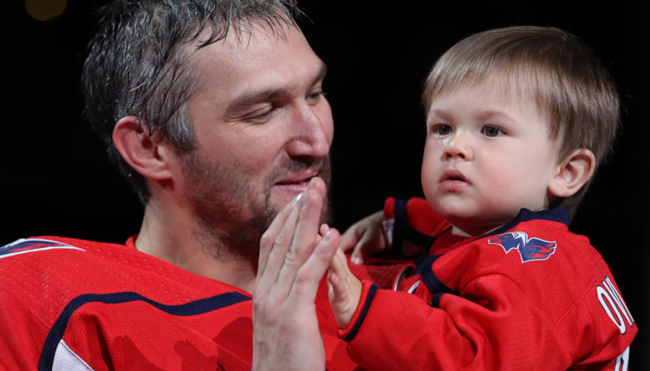 There may not be a concrete formula you can follow if you want to earn the right to call yourself a professional athlete one day, but most people who end up going down that career path get there with the help of good genes, great training, hard work, and at least a dash of good luck.

There’s no simpler way to check the majority of those boxes than being lucky enough to be born the child of one of the best athletes in the history of a particular sport, which is exactly what Sergei Ovechkin was able to do when he was welcomed into the world on August 18, 2018 by his mom Nastya and dad Alexander—the latter of whom is probably known as the most dominant player to grace an NHL rink since Wayne Gretzky skated his last game in 1999.

The elder Ovi wasted no time introducing Sergei to hockey, as the little dude didn’t even wait until he turned two to start honing his backhand.

While those videos might not be the most impressive showing of talent you’ll ever see, the same can’t really be said about what he managed to pull off less than a month after he celebrated his second birthday.

SERGEI OVECHKIN IS ONLY TWO YEARS OLD AND HE IS ALREADY JUGGLING THE PUCK AHHHHHH pic.twitter.com/IZKCmJHvqA

A few months later, Sergei took a few simultaneously small and massive steps when he threw on a pair of skates and took to the ice for the first time, and based on the most recent highlight video to emerge, he’s come a long way over the course of 2021.

Last week, Nastya posted a video of Sergei working on his one-timer with his dad, and while he might not currently possess the velocity that makes the elder Ovechkin the force that he is, he has plenty of time to continue to hone his technique when you consider he’s still a few weeks away from turning three.

If you’re curious, Sergei Ovechkin will be eligible for the NHL Draft in 2036, so at least the rest of the hockey world has plenty of time to prepare for its new overlord.