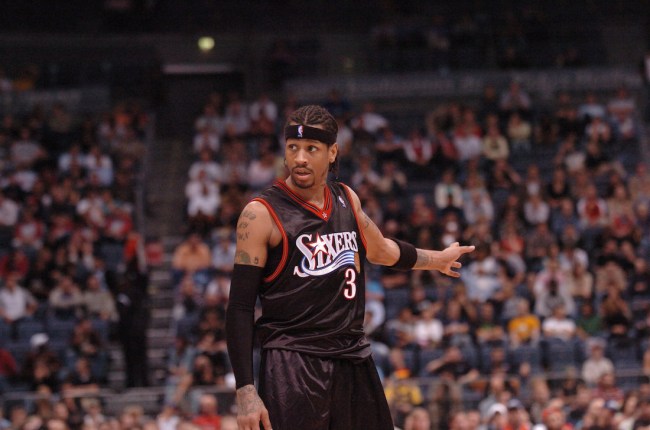 When it comes to early-2000s NBA games, nobody did it quite like Allen Iverson. Sure, there was Shaquille O’Neal, Kobe Bryant and a slew of other superstars in the league, but after Michael Jordan retired, “The Answer” stepped up and filled the void left by the GOAT, instantly becoming the most recognizable player thanks to his talent, passion, competitiveness and abrasive nature.

While Jordan was Mr. Clean Cut and was a PR dream, it wasn’t the same for Iverson, who was the complete opposite in terms of public image. He had a run-in with the law in high school. He clashed with coaches. He complained about practice being, well, practice. And he represented a whole new version of the NBA with his cornrows and tats. The dude literally innovated the league, and, pound-for-pound, is easily one of the best players to ever lace ’em up.

As competitive as anybody, there wasn’t much that could keep Allen Iverson from playing in NBA games. In fact, according to former Philadelphia 76ers GM Billy King — the man tasked with building a talented roster around Iverson after the team selected him No. 1 overall in the stacked 1996 NBA Draft — A.I. would go to extreme lengths in order to play.

Talking to Ryan McDonough on the “Audacy NBA Show” Friday morning, King described how dedicated Iverson was to the game, giving instances when the one-time league MVP would actually try sneaking into games even if he was too injured to play. In fact, per King, the 76ers would even hide A.I.’s jersey and shoes to try and prevent him from suiting up.

“When he was injured and we knew he couldn’t play we used to hide his jersey. Because he would come to the locker room looking for his jersey, we’d lock it somewhere so he couldn’t get it,” King said.

The former GM then recalled a specific instance where the 76ers wanted Iverson to sit out a game in New York. Iverson was able to find his jersey but not his game sneakers. He tried everything he could to find a pair of shoes he could use.

“One time, in New York, he found his jersey but didn’t have any shoes,” King said. “He was trying to send the ball boy to the Foot Locker around the corner. He said, ‘Just give me a pair of their Reeboks. I can play in those.’ Then he pointed to an attendant (and said), ‘What size are you, just give me those shoes,’ because he wanted to play so bad.”

I love everything about this, man, and only makes me respect Allen Iverson that much more. He was already one of my favorite players ever, but hearing stories like this goes to show how passionate and competitive he was — despite the public perception at the time thinking he wasn’t committed because of that infamous practice rant of his.

Iverson was an old school guy who changed the game in a modern way. He was all about basketball, and gave everything he had each time he stepped on the floor.

I remember seeing him effortlessly drop 48 on the Cleveland Cavs once while I was in high school, with A.I. just gliding through the game and making it look so easy. Like, it was the quietest near-50-point game I’ve ever witnessed, with Iverson just moving at a different speed than everybody else before, BOOM, looking up at the scoreboard and seeing him with 48 points.

There will never be another Allen Iverson, so it’s cool hearing all these stories about how competitive he was and how he valued winning over everything else. There are tons of Kobe Bryant memories and Michael Jordan stories like that, but A.I. often gets overlooked for some reason.