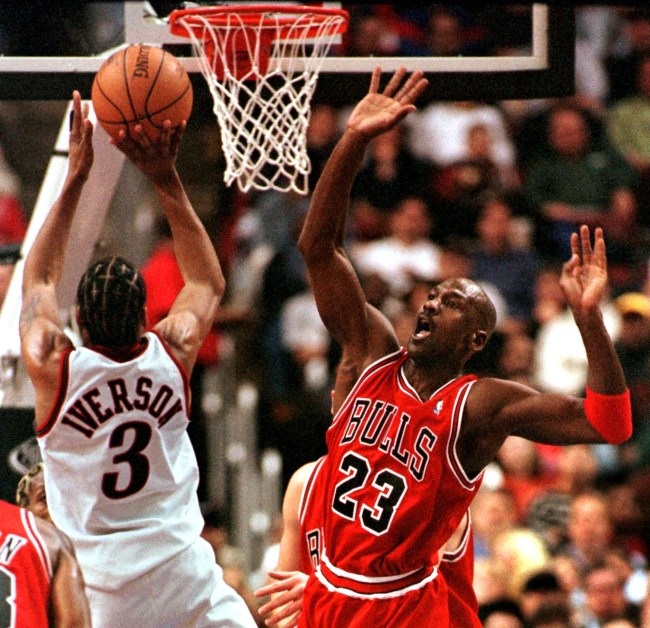 Allen Iverson was one tough SOB on the basketball court, as the Philadelphia 76ers legend could fill it up with ease when it came to scoring in bunches. And when you consider his pint-sized frame, it’s no wonder why LeBron James once referred to “The Answer” as “pound for pound, the greatest player ever” — because the dude was a like a bulldog who never backed down from his opponents.

Blessed with heart, determination and talent, Iverson represented a new breed in the NBA when he entered the league as the No. 1 overall pick in the infamous 1996 draft, and helped shape the league into a different, more uptempo brand of basketball. Hell, the dude even crossed up Michael Jordan, which, to this day, is still on of MJ’s most embarrassing moments on the hardwood.

While Allen Iverson may have gotten the best of Jordan on that specific play — and, 20-plus years later, it’s still something people talk about — it turns out the GOAT made sure he belittled AI as best he could when the two first best when “The Answer” was a rookie. As one might imagine, it included some simple (yet lethal) trash-talk from MJ.

Talking to Complex Sports, Iverson recounted the interaction with Jordan, saying it came during the 50th NBA season when Jordan and other all-time greats were being honored at the NBA All-Star Game. Rather than shoot the shit and talk shop, His Airness did what he often did to opponents — and hit Iverson with some disrespect, simply asking AI, “what’s up you little bitch?” Take a look below at Iverson telling the hilarious story.

“What’s up you little b*tch?” 💀💀 pic.twitter.com/nJMLkuA2Hh

“The first time I ever talked to him was that year playing in the Rookie game. That was the year they did the top 50 of all time when they had the jackets on and all that. I saw him walking through and I’ll never forget it because he said ‘What’s up you little [expletive]?'”

Look, considering we all just got done watching The Last Dance — which had tons of stories about how ruthless Michael Jordan was to everyone he encountered during his NBA days — this Allen Iverson seems to be fitting. If there was one thing Jordan knew how to do, it was get into the minds of his opponents and beat them before he even played them. He knew he was the greatest, and he was going to remind other people about that greatness to get a mental edge.

While Jordan’s trash-talk may have worked on most NBA players, Iverson seemed to laugh off the first interaction with MJ, and sort of just thought, ‘oh, so it’s gonna be like that, huh?‘ While His Airness got the best of AI during that first meeting, the young buck got his revenge with that killer crossover, basically forcing respect from the six-time champ.