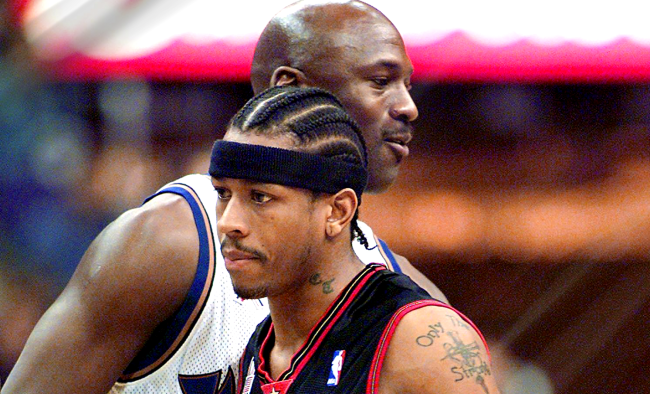 Michael Jordan was notorious during his playing days for his willingness to do whatever it took, no matter how small, to gain an edge on his competitors.

Chief among the many tactics he used to get in the heads of his opponents was the incessant and savage trash talk he inflicted upon them.

This week during an interview with Shannon Sharpe on Club Shay Shay, Allen Iverson and Al Harrington talked about just how nasty Jordan was willing to be with his chirping.

When Sharpe asked the two former NBA stars what it was like to meet Michael Jordan for the very first time, their responses were pretty telling.

“So for me the first time was actually seeing him on the court was with the Wizards, okay?” replied Harrington. “So it was just in the game and that game I actually had a good game and he started talking, he called everybody a ho. It’s just “ho, ho, ho, ho, ho.’ So finally I got to the point where like, you know, I know it’s Michael Jordan but I’m like, ‘Damn why do you go keep calling me a ho?’ He’s like, ‘You a ho!'”

“Yeah, he called me a little b-tch!” Iverson interjected, cracking Harrington up.

“So, I had to wear it, but after that game you know after that game, we went to overtime and I had 35 that game he had 41, they won the game. After the game, he signed some shoes and sent it to me after the game, and was like best wishes, keep playing hard and all that, and I didn’t even ask them for them.

“So for me it was like, you know, I grew up a Knicks fan, right? Well, obviously, everybody you gotta like Michael Jordan at the end of the day, but it was just a surreal moment for me, but at the same time you know I went out there and I competed against him for sure.”

Sharpe then turned it over to Allen Iverson for his story about meeting Michael Jordan for the first time.

“First of all, I was a Bulls fan coming up because of him okay? But while he was in the league, man, I mean I hated the Bulls more than any team in that league,” Iverson recalled. “I hated the Bulls, you know what I mean? Like once I got into the league and heard the way they talk to us and everything like, they knew they was at the top of the mountain.

“And my teammates, they teased me before the game because they was like, ‘you’re not going to play your game because you know mike on the floor. Yeah I don’t want to be out there on the floor, you’re not going to play your game tonight.’ And I was star struck, but when that ball went up and somebody hand touched it it just went away. I mean, it was show time. Time to dance.”

Sharpe agreed, saying, “To this day, every time I see him he don’t look real. I’ve never been like that with a man before in my life… he ain’t real.”

Iverson concluded the discussion by saying the only person he can compare Michael Jordan to when it comes to stuff like that is Michael Jackson, then proceeded to crack Harrington up with a story about how he almost fainted when he heard Jackson was in the same hotel as him one time.”