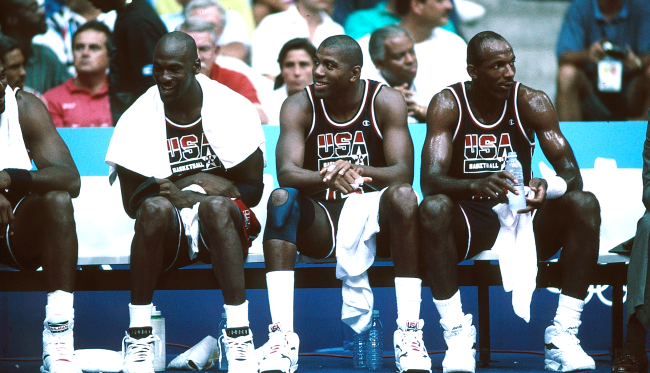 As many NBA fans already knew, but was 100 percent confirmed during the ESPN documentary series The Last Dance, Michael Jordan was not a fan of people comparing him to Clyde Drexler during his playing days.

In fact, as MJ put it during the docuseries, he “took offense” at the comparisons.

In his new book Playing For Keeps: Michael Jordan and the World He Made, author and NBA insider David Halberstam discusses how Michael Jordan tried to humiliate Clyde Drexler during the 1992 Dream Team’s scrimmages.

Related: Clyde Drexler Takes A Thinly Veiled Shot At Michael Jordan After Being Disrespected On ‘The Last Dance’

After the Chicago Bulls defeated the Portland Trail Blazers in the 1992 NBA Finals to win their second of what would end up being six NBA championships, it was time for the NBA legends to begin preparing for the Olympics. Part of that preparation involved playing some scrimmages that would also go on to become legendary.

This meant His Airness would once again have the chance to show just how much he disliked the comparisons between himself and Drexler.

“Jordan did not pass up the opportunity to talk some trash as he brought the ball upcourt,” writes Halberstam. “‘Didn’t I just kick your ass? … Anything here look just a little familiar? … Think you can stop me this type, Clyde? … Better watch out for the threes, Clyde.’

Jordan was, as always, just relentless during the game.

“Eventually, some of his Dream Team colleagues suggested that Jordan cut back on the trash talk with Drexler because they were all teammates now, and there was no reason to reopen wounds so fresh. Back off, he did, but the coaches noted that every time Jordan guarded Drexler in scrimmages, he took the defensive level up more than anyone else.”

Following the airing of The Last Dance, former Bulls guard Craig Hodges told Vlad TV, “Not every great athlete is marketable. I remember having a conversation one time. It was like four of us, MJ included. And the conversations came up about Clyde Drexler. And MJ said this, ‘Clyde Drexler is just as good as me. He just don’t know how to play the game.’ And we ain’t talking about basketball.”