Michael Jordan Wanted Bigger Biceps In His Playing Days So He Could Gain A ‘0.0001 Percent’ Edge 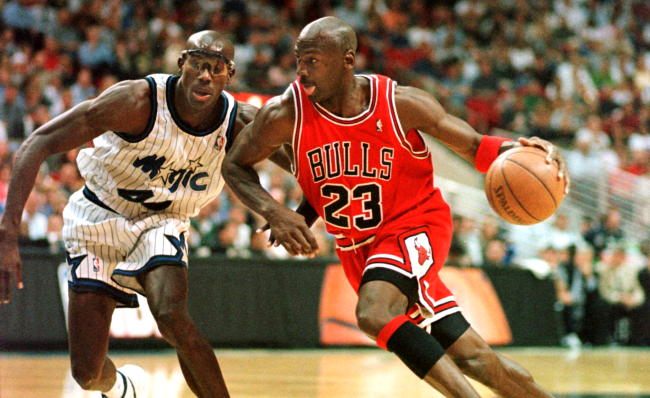 Michael Jordan’s former personal trainer Tim Grover recently published a book called Winning: The Unforgiving Race to Greatness in which he talks about his three decade career wotking with some of the world’s top athletes.

As was well documented in The Last Dance, there came a time in Michael Jordan’s career where he realized that if he wanted to take his career to the next level and start winning NBA championships he was going to have to put on some muscle.

However, MJ being MJ, he didn’t want to just get stronger and add weight to deal with the grind of playing almost 100 games a season. He also wanted to use his training to enhance perhaps his number one skill: intimidating his opponents.

“When I was training MJ, the Bulls’ strength coach asked why I had him doing bicep curls,” Grover writes in Winning.

“The theory was biceps were just for show and didn’t really make someone a better basketball player, and that was probably true. But we were going for that 0.0001 percent, which included the intimidation factor of his biggest, stronger, more dominant physique.

“What’s the first thing you see on a basketball player when he takes off his warm-ups? Those arms. Details matter.”

Grover also reveals in his new book that Michael Jordan was so fastidious about his preparation to be the best even his pre-game meals were designed for that purpose.

“Back in the eighties and nineties, the nutrition prescription for athletes was carbs, carbs, more carbs. Everyone was eating rice and pasta for fuel, but that wasn’t working for MJ. Aside from feeling bloated, he was playing so hard that it just wasn’t enough for him,” Grover writes.

“When the team was playing at home, he was eating at 3:30 p.m. in order to get to the stadium by 6 p.m. So he was starving by the 7:30 p.m. game time, and by the fourth quarter, he could feel his energy decreasing. So we added a steak to his pre-game meal.

“We had to devise a new plan for Michael, based on his body chemistry and schedule, his playing minutes, and the massive amount of energy he expended on the court. The steak slowed down the digestion of everything else he was eating – the starches, vegetables, etc. – and kept his blood sugar consistent so he had more energy throughout the entire game.”

Want to learn how you can get and stay fit? Peep the workouts and diet plans that these famous people follow: Troy Aikman, The Rock, Lewis Hamilton, Tim Tebow, and more.