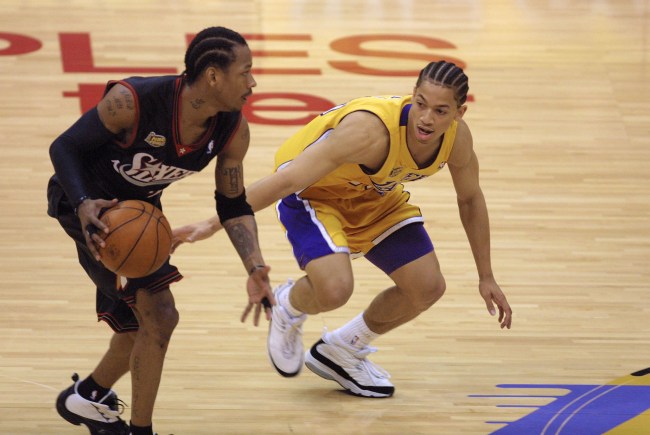 Allen Iverson was a cold-blooded assassin on the basketball court, with the Hall of Famer showing no mercy against anybody who dare guard him. Remember, this is the same dude who crossed up the GOAT, Michael Jordan, in his rookie season, which was a definitive statement about the balls that he had.

While the crossover on MJ was one of the most memorable moments in Allen Iverson’s illustrious playing career, the most iconic was his stepover of then L.A. Lakers guard Tyronn Lue during Game 1 of the 2001 NBA Finals. And, although I respect the hell out of Lue because he helped guide my Cleveland Cavs to a title in 2016 in unforgettable fashion, I’m going to do him a little dirty by showing the play in the gif below.

It’s one thing for Iverson to step over an opponent, because the level of disrespect is next level. It’s another thing to do it on the road, against the Lakers, during the NBA Finals and, oh yeah, in overtime to pretty much ice the game. I remember watching this play live after my older sister’s high school graduation and thinking to myself, “fuck, A.I., you’re a bad motherfucker.”

But here’s the thing about that play: Iverson actually hates it. So even though it’s one of those moments in NBA history that we all gawk over, he told Stephen Jackson and Matt Barnes during his appearance on their “All the Smoke” show that he didn’t even know he did it until afterwards. Take a look below at what “The Answer” had to say.

Allen Iverson on the Tyronn Lue stepover – "I don’t like it cuz I love him. He was giving me so many problems man, harassing me, just straight dog. What’s so crazy is I don’t know how it happened. I didn’t know I did it. You don’t know when you’re gonna do something."

It’s really interesting that Allen Iverson dislikes, arguably, the most ruthless play of his entire career. For a guy who’s always been full of confidence and swagger, you’d imagine the A.I. would at least joke about the thing, and bust Lue’s balls for being straight up embarrassed. But it says a lot about him that he actually downplays it, admitting it’s something he doesn’t even like.

The entire “All the Smoke” episode with A.I. was entertaining as hell, with the always candid Iverson talking about a handful of topic, which included calling out media member who he really, really hates. The dude is a legend, and he’s got some stories that every sports fan could listen to for hours.