Here Are Contract Details For Alliance Of American Football Players, Which Includes An NFL ‘Out’ Clause 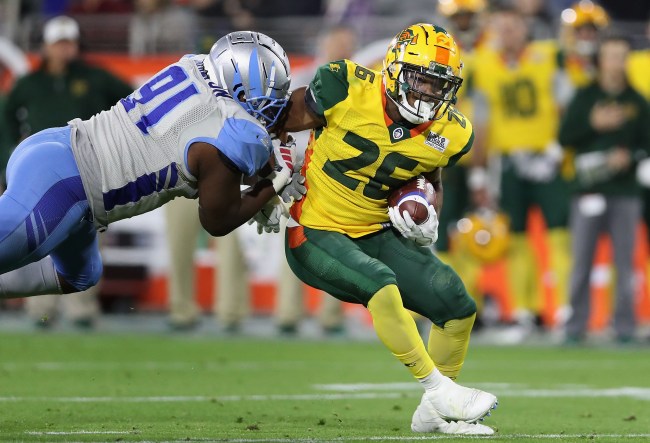 The Alliance of American Football (AAF) kicked off its first season this past weekend and, to the surprise of some, actually scored some serious ratings. Considering the nation’s obsession with football, the AAF games on Saturday actually outperformed the NBA Saturday night primetime matchup between the Houston Rockets and Oklahoma City Thunder, so the league has to be excited about the initial reception. Here’s what Darren Rovell tweeted out about the ratings.

While it’ll be interesting to see if Week 2 of the Alliance of American Football can be equal to or surpass those impressive numbers from last week, one thing’s definitely true about the league: people are talking about it. And, because the AAF is still just a week old, it might be helpful to know a few things about the league that you otherwise wouldn’t — like how much each players gets paid.

According to Pro Football Talk, each player in the Alliance of American Football is signed to a base deal for three years and $250,000. There is a caveat to that contract, though, because it also includes and NFL “out” clause, meaning players who are under contract with teams can leave for the “big leagues” if a team comes calling without penalty. Here are some of the details of AAF player contracts, per to Mike Florio of PFT.

In a letter sent to NFL agents, the AAF’s player personnel department explains that the league “will consent to the player leaving The Alliance at the end of that Alliance season to play in the NFL.” The so-called “NFL Out” will be available from AAF’s championship game until December 1st of that same year.

The AAF’s “NFL Out” rule clearly implies that Alliance players won’t be allowed to join a 90-man roster and embark on offseason workouts before the 10-week season ends, including two-week postseason. That will keep AAF players away from the NFL until, in many years, the weekend of the NFL draft.

With the Alliance of American Football season ending on April 27 — which is the same day as the NFL Draft — any player from the AAF who does sign with an NFL team would basically have the same amount of time as an incoming rookie to prepare for the upcoming NFL season. That’s an important factor for players with NFL aspirations, because, essentially, it allows them to use the AAF as an NFL offseason league, helping them stay in shape and showcase their skills for NFL teams.

Considering most of the players in the Alliance of American Football are former NFL players themselves, it’ll be interesting to see how many can work their way back into the league before the next NFL season kicks off. And, while $250,000 over three years isn’t anything to scoff at, the NFL league minimum salary in 2018 was anywhere between $480,000 and $1 million depending on NFL service time, per Spotrac, so there’s definitely financial reasons to try and land on an NFL roster.

Still, the Alliance of American Football gives players an opportunity that seems to have a direct link to the NFL, making it the closest thing to a minor league system.