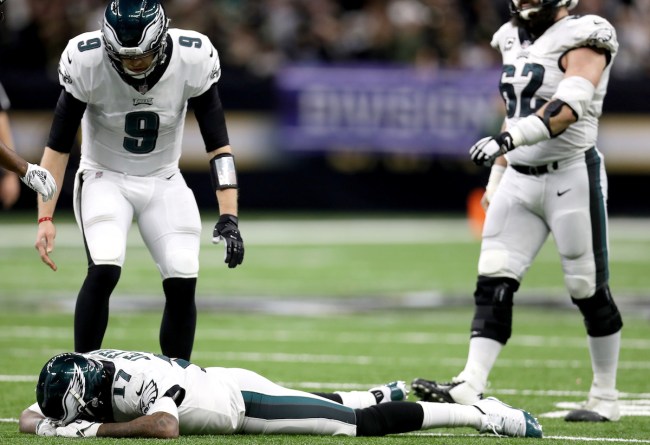 This week, the highly-motivated Saints will take on the Rams for the right to represent the NFC at Super Bowl LIII— a matchup that was made possible thanks in no small part to the efforts (or lack thereof) of the Eagles’ Alshon Jeffery.

It looked like Philadelphia was poised to cruise into this Sunday’s conference championship after scoring two unanswered touchdowns in the first quarter of last week’s divisional showdown.

Unfortunately, they suddenly forgot how to play football and let the Saints score 20 straight points before finding themselves down by six with just a few minutes remaining in the fourth quarter.

With the ball in their hands and the game on the line, the Eagles woke up and began to march down the field on the back of Big Dick Nick Foles. However, the parade came to an abrupt stop after a pass went through the hands of Alshon Jeffery and into the arms of Marshon Lattimore for a game-sealing interception.

HUGE PICK FOR THE SAINTS!!!

Nick Foles’ pass goes through Alshon Jeffrey’s hands and Marshon Lattimore gets his second interception of the game when the Saints needed it most 🔥🔥🔥 pic.twitter.com/pMGSF6CbOC

Jeffery— who’d previously bragged about having “the best hands” in the NFL— took full responsibility for the loss after the game, and while he was an easy scapegoat, it’s absurd to say the blame was entirely on him.

Of course, that didn’t stop people from tearing into him but plenty of others were sympathetic— including a young fan who wrote him a heartfelt letter to remind him— and everyone else— the drop wasn’t the end of the world.

Dear @TheWorldof_AJ, our second grade daughter is a huge fan and wrote you a letter in school yesterday. @Eagles #FlyEaglesFly #Eagles 🦅🦅 pic.twitter.com/N3bx7xLlQl

The message quickly went viral and eventually caught the attention of Jeffery himself, who decided to thank the second-grader and her classmates for their support by stopping by her school on Thursday.

MUST WATCH: Alshon Jeffery @TheWorldof_AJ surprises the 2nd graders from West Chester who wrote him letters of encouragement after the @Eagles loss to the Saints. Such a special moment – we told them we were trying to FaceTime him 😂#FlyEaglesFly#Eagles@6abc pic.twitter.com/WYgpPKb6VZ

Only #ActionNews is there as #Eagles WR Alshon Jeffery pays surprise visit to second grade class in West Chester that wrote him touching letters after Sundays playoff loss. Tonight at 6 on @6ABC! @TheWorldof_AJ @JamieApody Here's a preview: pic.twitter.com/KS3ZuCz6OF