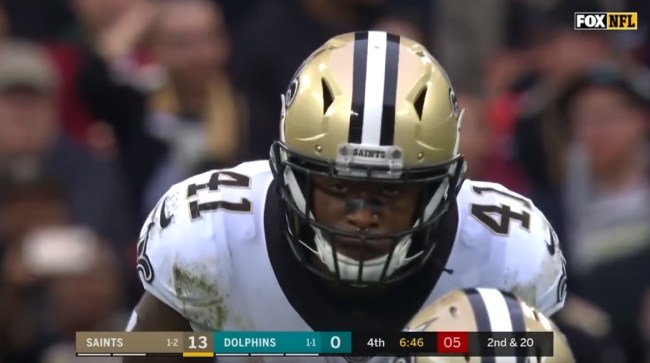 Alvin Kamara of the New Orleans Saints is one of the most dynamic players in the NFL. Whether he’s in the backfield and handed the ball as a runner, or spread out wide as a receiver to give the defense headaches, the two-time Pro Bowler is versatile as hell — and the prolific Saints’ offense is perfect to utilize his skills.

While Kamara might be a stud now, just a couple years ago as a draft prospect, there were a lot of unknowns with what he could potentially become in the NFL. Splitting time at Tennessee as a running back, some NFL teams wondered if Alvin Kamara was a starter, a role player or someone who would struggle to even make the team. In the end, he’s as lethal as any offensive player in the league.

Before the Saints selected Kamara in the third-round of the 2017 NFL Draft with the No. 67 pick overall, he, like other prospects, had to go through the pre-draft process. And in a recent video with UNINTERRUPTED, the running back talked about what that was like for him — specifically detailing a story about a team who may have been scared off by him because of his nose rings.

“I had a team before I went into a meeting, one of the guys came up to me and was like, ‘Well, you’re about to go in with the G.M. so, you know, he doesn’t really understand the nose rings and things like that. So you might want to — can you take them out or tuck them?’ I was like, ‘No,’ Kamara said.

That’s a big dick move if I’ve ever heard one. Who knows what team it was, but for Alvin Kamara to openly tell a higher-up in a franchise that he didn’t want them to draft him if they didn’t understand the reason he had piercings is big-time. It showed that, while his goal was to play in the NFL, he was going to stay true to himself and not conform for anyone — even if it may have meant him sliding down on some teams’ draft boards.

Thankfully, it all seemed to work out for Alvin Kamara and the Saints, because the guy’s a monster on the field, flashes his personality in the locker room and in interviews, and, at 23 years old, is only getting started. Now I just feel sorry for the team that passed on him for having a nose ring.