Anderson Silva Is Pushing The UFC To Put Him In A ‘Super, Super, Super’ Fight With Conor McGregor 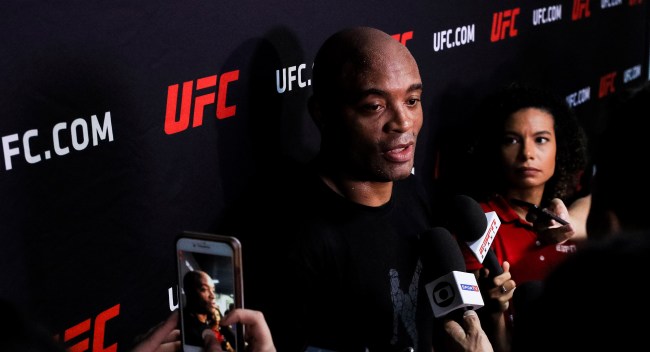 Former UFC middleweight champion Anderson Silva, once considered the greatest MMA fighter on the planet, is set to take on Jared Cannonier at UFC 237 this weekend. [Analysis and How to Watch.]

And while Silva is now 44-years-old and well past his prime with just one win in his last seven fights, he is already overlooking Cannonier and has his sights set on another fighter who hasn’t won a MMA fight since November of 2016, Conor McGregor.

Back in February, McGregor was watching Silva lose to undefeated Israel Adesanya at UFC 234 when he sent out this tweet…

Anderson is one crafty, crafty Martial Artist.
You only develop these methods through years of hard fought experience.
Phenomenal performance.
The crafty veteran. Big respect always.
It would be an honor!

When told about the tweet after the fight with Adesanya, UFC president Dana White said the fight was “definitely possible, but Silva dismissed it saying, “No, I don’t like that fight at all.”

Fast forward to this week, and someone has changed their mind, because based on what Silva told TMZ Sports, it certainly appears that “The Spider” is now MORE than willing to take on “The Notorious One” now.

“I believe I could cut my weight for 180, I believe McGregor could weigh for 180. That’s the good fight for me and Conor. That’s a good experience for the fans, especially the fans for this sport. That’s a super, super, super fight. Anderson Silva and Conor McGregor.”

Silva went on to say that despite his advanced age, he still has “three or four” more fights on his contract with the UFC.

I don’t know if Silva vs. McGregor would qualify as a super fight, but considering the fact that Silva walks around weighing about 30 pounds more than McGregor on any given day it certainly “could” be an interesting one.