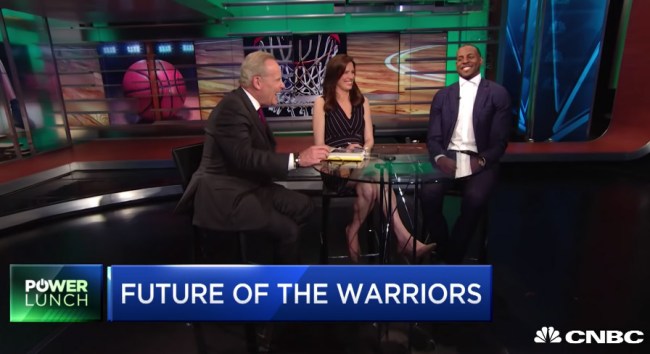 On Monday, Golden State Warriors forward Andre Igoudala appeared on CNBC’s Power Lunch show to promote his new book The Sixth Man: A Memoir and to talk a little bit about how he deals with the business side of the NBA.

Naturally, the subject of the Warriors having two big names, Kevin Durant and Klay Thompson, officially entering free agency this Sunday, came up during the discussion.

Rumors surrounding Durant have been running rampant with reports that he is angry with the team over his Achilles injury, that the Warriors have reportedly discussed sign and trade options with him, and that there are teams out there that would still give him a max contract, even with his bad leg.

Buzz surrounding Klay Thompson has been much quieter, with a report that Golden State still plans on giving both he and Durant max contract offers despite their devastating injuries.

“You want to tell us whether they’re going to re-sign?” Iguodala was asked by co-host Tyler Mathisen.

“I think they’ll both be back with the Golden State Warriors,” he replied with a smile. “We’re like brothers, we all keep in contact.”

“No one, nobody’s going to the Knicks, sorry!” Iguodala quickly interjected.

“Well, none of my guys are,” Iguodala answered with a chuckle.

The Knicks want to fine Andre Iguodala for saying today on CNBC: "Nobody's going to the Knicks, sorry.”

On Tuesday, Kevin Durant truther Jalen Rose decided he didn’t care what Iguodala said, he is sticking to his Durant to Knicks story.

Also, if you happen to be interested in where Iggy is doing his investing, here you go…