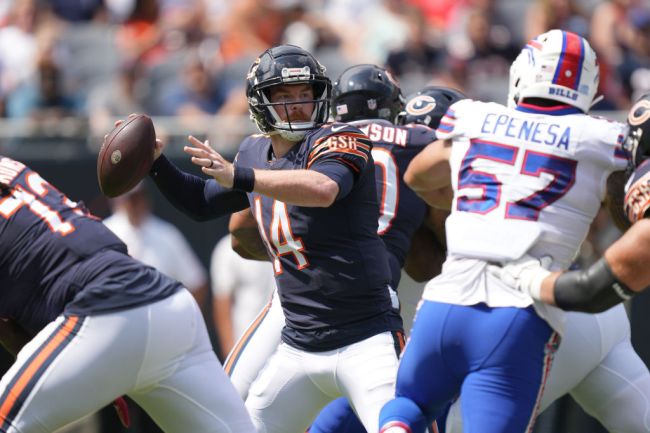 The quarterback competition in Chicago is one of the best storylines to watch heading into the 2021 NFL season. Veteran Andy Dalton was signed by the Bears in the offseason and rookie Justin Fields was drafted No. 11 overall in April.

As made clear by the team’s infamous QB1 graphic, Dalton is the starter for Week 1. However, that is subject to change if Fields continues to play well.

The 22-year-old rookie began in training camp by making ridiculous throws that caused Bears fans to have their head explode at the idea of a franchise quarterback. 10 days later, Fields put on a show and his fanbase was calling for him to start. Field was so confident in his play that he smiled at the line of scrimmage before throwing a touchdown.

Meanwhile, the impatient Chicago faithful made their opinions heard as the Bears hosted the Bills for Week 2 of the preseason.

The game marked the return of Mitch Trubisky to his former home and he was dealing, which made Chicago fans sick. On the other side, of Dalton’s first four possessions, three ended with a punt and one resulted in a fumble.

Down 28-0, Dalton came back onto the field with about eight minutes left in the half. He was greeted with LOUD boos.

Two plays later, Dalton connected with receiver Rodney Adams for a 73-yard touchdown. Adams made a hell of a catch, but Dalton deserves some credit.

That single throw silenced the crowd momentarily but Dalton’s final two drives of the half ended in a six-play, 15-yard turnover on downs and an interception. Bears fans booed him into the locker room.

Dalton finished 11 of 17 for 146 yards, one touchdown and one inteception.