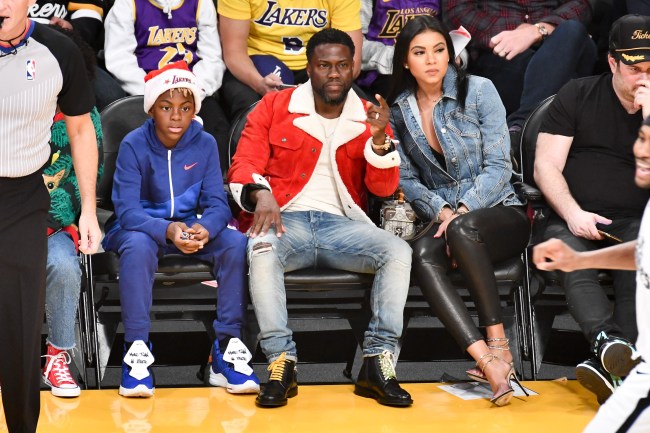 The LA Clippers took down the Lakers on Christmas day (111-106) thanks to Kawhi Leonard putting up 35 points and pulling down 12 rebounds followed by Paul George’s 17 points. LeBron, Kuzma, and AD all put up big stats on Christmas day with 23, 25, and 24 points each respectively.

I was no less than six glasses of homemade eggnog deep by tip-off of that game (I wish I was lying about that) so like many people on the East Coast who were completely drained from the long holiday, I missed the end of the game. But, based on the hype tweets from last night, I am very much looking forward to missing the end of the inevitable Western Conference Finals games next year between the Clippers and Lakers.

I’ve caught up on highlights from the Lakers-Clippers on Twitter this morning and despite this not having anything to do with the game itself, the one highlight that stands out the most was Anthony Davis falling into Kevin Hart‘s lap. The whole scene looked like a little kid getting an oversized teddy bear for Christmas.

There was also another clip of Kevin Hart swinging at Kawhi (below) which is pretty funny but let’s check out the first clip of Hard and KD with LeBron swooping in to ruin the moment.

The reactions were all spot on and made the otherwise forgettable moment pretty spectacular online. LeBron was certain to make the moment about himself.

Lebron running over to Kevin Hart to jump on and ensure he gets attention pic.twitter.com/UXW0KuRwkV

Kevin Hart mouthing ‘get the fuck off me’ was great. Nobody wants a 6’10” dude who is covered in sweat sitting on top of them. Least of all, a wildly successful multi-millionaire who isn’t accustomed to getting clowned on by anyone other than The Rock.

Anyone besides me think he says “Get the F off me” because he literally almost died in a car accident and broke his back and most likely in so much pain??

Santa taking a break from giving away presents to watch the game. And they are already sitting on his lap

The Kawhi moment was pretty good too. Kevin Hart was all over the cameras last night. The Lakers LOVE seeing this shit form their A-listers who can fork over the $$$$ for those courstide seats on Christmas and Kevin Hart didn’t disappoint.

I don’t even want to attempt the math of what five courtside seats would cost at the Staples Center on Christmas Day in an all-LA game. I’m sure they give him a break in the cost because he’s a global celebrity and it looks good for the team to have him on the court but MY GOD that must’ve been expensive.