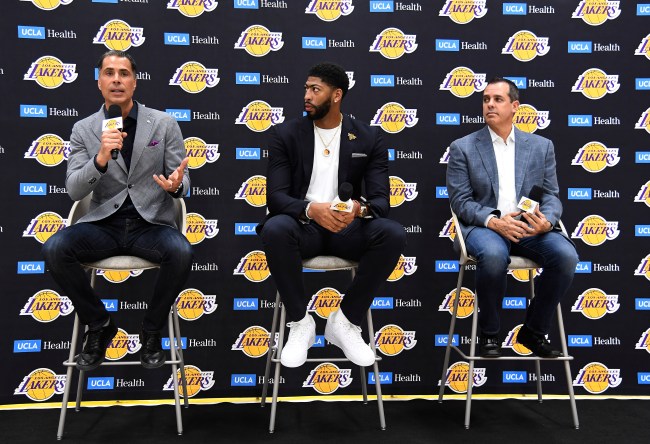 Anthony Davis isn’t quite used to being consulted about offseason moves. In fact, the whole thing caught him off-guard this summer after the All-Star big man was traded to the Los Angeles Lakers in hopes of putting the franchise back in title contention as LeBron James’ superstar running mate.

In a recent ESPN piece with Dave McMenamin, Anthony Davis talked about how much input he and James had with Lakers general manger Rob Pelinka, who, according to Davis, made sure to talk with his superstars about nearly every single thing happening with the team this offseason as they rebuilt the roster. While that was definitely appreciated by the newest Lakers star, he did joke about it being a little over the top and aggressive, even describing Pelinka as a “stalking girlfriend” for the amount of contact he was having.

“We were doing constant calls about, ‘What do you think of this or this player?’” he says. “Rob was almost like a stalking girlfriend. He was an agent, so he’s played both sides. He knows that in order for stuff to work, the players have to be involved. And he tried to make sure that LeBron and I were involved as much as possible. During free agency, every decision I got a text or a call, even just two minutes, ‘Look, this is going on. … How do you feel? OK, cool.’

”Every single decision. I [have] never been involved so much. No matter who the player was, he wanted to make sure. It was on everything. And it was like, ‘Wow.’ To the point where I was like, ‘All right, Rob, stop calling me.’”

That’s a pretty honest (and accurate) description from Anthony Davis. Sure, superstars in all sports get called to give their input about potential moves from their team, but it was something new for Davis, and it seemed a bit too much at first. He better get used to it, though, because it’s sure to happen moving forward — no matter if he stays with the Lakers or moves on after this season.

Considering the fact the Lakers are projected as one of the favorites to win the NBA title this season, Anthony Davis and LeBron James must have done something right in their feedback to Pelinka, because the roster from top to bottom looks deeper and more talented than in the past few seasons. We’ll have to see if it all comes together for them once the new NBA season tips later this month.