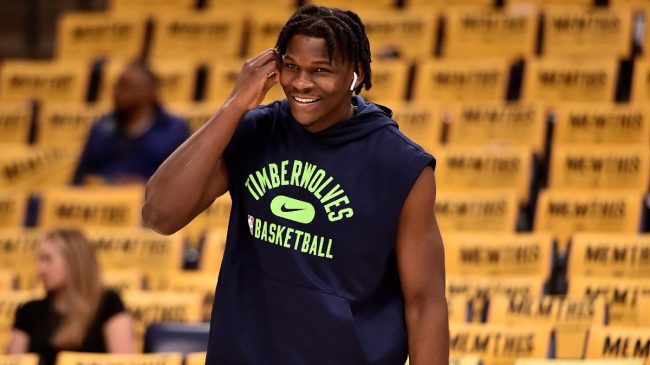 Anthony Edwards has never lacked confidence on the basketball court.

He was the top ranked player to come out of his high school class, opting to play for his hometown Georgia Bulldogs rather than cycle into a historical blue blood.

After one season, where he averaged over 19 points a game, he was off to the NBA. Edwards would become the top selection in the 2020 Draft, being picked up by the Minnesota Timberwolves.

In just his second season, he’s completely changed the trajectory of the team.

The Timberwolves went just 78-140 over the last three seasons, twice finishing in the cellar of the Northwest division. Fast forward to this year and Minnesota finds itself in the NBA Playoffs for only the second time in the last 18 campaigns.

Making things even sweeter, they hold a 1-0 lead in the opening series against Western Conference foe Memphis.

Edwards has been a big part of that, averaging 21.3 points to rank second on the team. He also leads the team in steals, three-pointers made, and minutes played.

That confidence is a big reason why he’s been able to perform to the level that he has. Earlier this week, we got to see this confidence in his personal life with a hilarious story about his dog.

Edwards appeared on NBA Today to talk about the upcoming preparations for game two of the playoff series versus Memphis. Somehow, his dog became the center of the discussion.

And the background behind Edwards’s dog’s name is great.

The basketball star named his pup Anthony Edwards Jr., noting that he can do it all.

Just learned that Anthony Edwards named his dog "Anthony Edwards Jr." because he, too, can do everything. Absolute legend. pic.twitter.com/4Soms3wEtF

Host Richard Jefferson later asks Edwards, “Who has more confidence, your dog or you?”

Edwards replies, “Me, because I give him the confidence… I’m the Pat Bev at my crib.”

Edwards and the T’wolves take on the Grizzlies Tuesday night as they look to gain a 2-0 lead in the series.