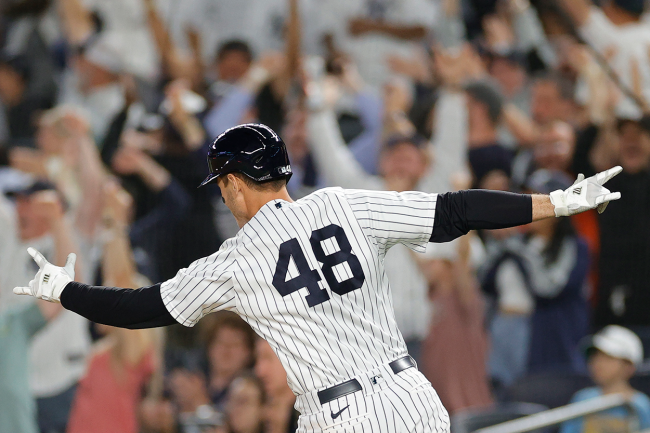 The New York Yankees are on an absolute tear. They have won 14 of their last 15 games and sit atop the American League East by a 10-game margin.

On Thursday night, their 14th win came in dramatic fashion.

After Luis Severino was pulled from his start and placed on the COVID-19 list, New York geared up for a bullpen game against the Rays that could not have gone any better. Four pitchers combined to allow one run on only three hits with two walks.

However, it took some last-second heroics for the Yankees offense to take advantage of the dominant outing from their staff. With one out in a 1-1 game, first baseman Anthony Rizzo stepped up to the plate on a 2-1 count and sent a walk-off home run into the night sky.

Into the night. @ARizzo44 🥶 pic.twitter.com/gSwttTBHKk

Of course, after Rizzo made his way around the bags, he was met by his teammates who mobbed him and showered him in bubble gum as he crossed home plate. The scenes were tremendous.

However, Rizzo’s night wasn’t perfect. As he came around third and headed for home, he tried to hit ‘The Griddy.’

New York, particularly Gleyber Torres, has made the now-famous dance their thing after home runs. But Rizzo should have left it to the professionals, because his Griddy was absolutely terrible.

Yikes. That’s tough. But at least he was the hero, so no one can fault him.