Antonio Brown Apologizes To The Steelers, Sideswipes JuJu Smith-Schuster And Hines Ward, Says He Might Not Play Again 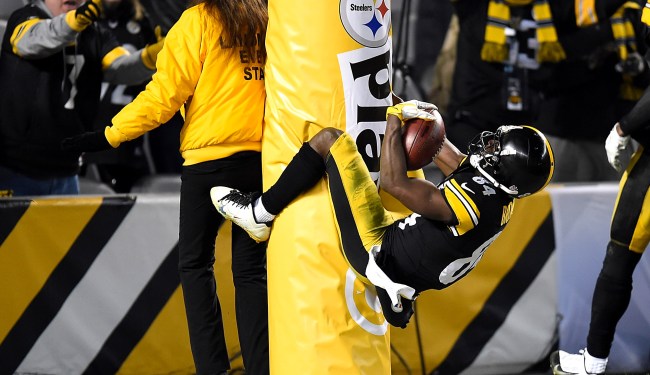 Antonio Brown had himself a busy Thursday morning. He did an interview on 93.7 The Fan in Pittsburgh, apologized to the Pittsburgh Steelers organization, dissed JuJu Smith-Schuster and Hines Ward, and (again) said he might not play in the NFL anymore.

During his appearance on The Fan Morning Show with Colin Dunlap and Chris Mack said that despite his most recent run-in with the law, he is “hanging in there, man, life without football is a little different for me but you know you just adapt and adjust.”

So far, since his release by New England after just one game, AB is hasn’t done a very good job of adapting or adjusting.

He did, however, apologize (again), this time to Steelers owner Art Rooney II, coach Mike Tomlin and quarterback Ben Roethlisberger (who Brown called a “loser”).

“I apologize to those guys for the distractions,” said Brown. “The unwanted attention I probably caused those guys. To the fans and organization. So obviously you want to clear out any baggage or disrespect or unintended attention that was brought on to the the organization. You know these guys gave me an opportunity when I was 21 years old, and I’m forever grateful for those guys. To not only have the opportunity to play with those guys but be in so many amazing moments, and we’ve been through so much. So I’m forever grateful and indebted to the organization. Mr. Rooney. Mike Tomlin. Kevin Colbert. Ben Roethlisberger. You know I started my career with those guys. A lot of beautiful moments. A lot of amazing things. So it’s not all bad. I just think from an emotional standpoint, when stuff got bad, it just seem bad. But we got more good moments than bad.”

Brown also discussed being benched for skipping practices (and other things) before the Week 17 game against Cincinnati at Heinz Field in 2018 season, “I just was emotionally drained and just frustrated about how everything went down. A lot of stuff go down and people don’t know what really happens.”

He also talked about his recent arrest and court-order psychiatric evaluation.

“I’m pretty good man. Those guys put me in a crazy check, and I don’t even know why they did that,” he said. “But I just think mental health is really important. It’s really difficult for me when I can’t even go out in the public, everyone coming up to me putting their camera phone. Everyone got an agenda for what they want to get from me. What they can make off me. So it’s good to be around people and talk to people that don’t have no agenda. That can support your mental health and just listen to you. It’s not about the material things or the money. People need support. Support and love. Meaning someone they can call, people that can listen to you. And people that can give them the right encouragement without no feedback of selfishness or wanting. So for me, it’s about surrounding myself with people that protect my best interests, people that will work as hard as me and people that are inspired to win. I’ve always been a guy who just wanted to win. Positive guy. I don’t really have anger. I just think I’m really bored.”

As for his back-and-forth with current Steelers wide receiver JuJu Smith-Schuster, who Brown has called a “bum” in the past, Brown

“I never said anything about JuJu,” Brown responded. “The problem is when you’re Antonio Brown and you’re this big guy in this big spot, it’s like if someone [comes] at me negative I can’t even come back at ’em. JuJu Smith-Schuster was a young guy who’d send me DMs when he was in college. So much how he looks up to me. So much how he wants to work with me. And then you get a chance to work with me. You have your best season ever. I’m about to leave and you post a picture of you scoring a touchdown on the team I’m going to saying you ready. That’s a form of disrespect.”

Brown added, “I don’t have anything against JuJu Smith-Schuster. Why would I? I’m who he wants to me. I’m in a position that he’s striving to be in.”

He also claimed when he arrived in Pittsburgh, wide receiver Hines Ward “didn’t show me the respect I needed. Or gave me the support or positivity I needed. I’ve never been to his house. I never studied plays with him. I never went over how to win or get open or how to do this right or how to do this. I gave the guy JuJu Smith all the positive cheat codes. All the stuff to be successful.”

Other topics covered by AB and The Fan Morning Show include his cursing at police on Instagram, his leading police on a 100 mph car chase, whether he’s ever tried to smooth things over with Ben Roethlisberger, and how he’s a really good dad.

When asked if he is still trying to get back into the NFL, Brown replied, “I don’t know, man. I don’t know what I want to do. I’m taking it one day at a time.”

But it’s all good.

“Everything is beautiful. It’s just a real adversity I have to go through. Everyone loves comeback stories, man. I’m in shape. 2020’s going to be a great year. And it’s a great opportunity to bounce back,” said Brown.