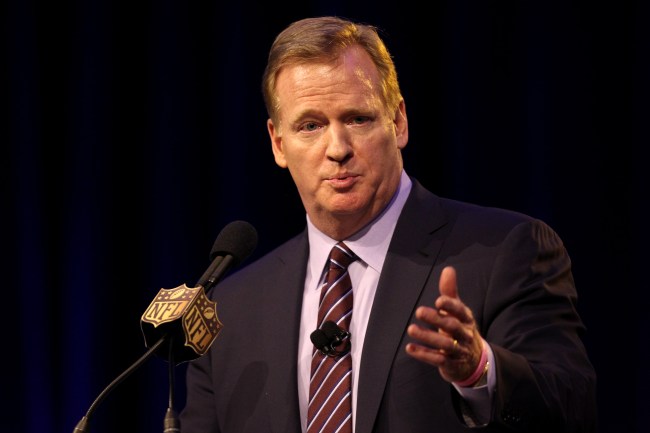 Roger Goodell’s reputation when it comes to player safety isn’t all that great. It’s not that the NFL Commissioner openly says he doesn’t care, it’s that he hasn’t done much to support the claim that he’s got the best interests of players in mind when it comes to the decisions he makes. For instance, is a proposed longer regular season really the way to prove to football fans that player safety is of concern? On the surface, probably not.

Look, the NFL is a billion-dollar business, and Goodell’s sole concern is expanding the game as much as possible in unique ways in order to make money. Yes, it’s important to keep players safe — and he seems to be doing things to at least try to do that — but in a violent sport like football, it can be difficult. Unfortunately, given the power and his past, Roger Goodell seems to be in a lose-lose situation.

While that may be how most fans feel about the NFL Commissioner, Goodell’s recent comments about embattled wideout Antonio Brown sounds a little different. That’s because he said that he’s committed to helping Brown get “on the right track,” stating that, while the player isn’t currently in the league, the NFL will still provide the necessary resources for him to get better.

“The first thing for all of us is to think about the well-being of Antonio, to understand what Antonio’s going through,” Goodell said Wednesday in Miami at his annual Super Bowl news conference. The league’s investigation into the former NFL wide receiver has been ongoing for months.

“We don’t talk about the wellness of our players publicly, but I would tell you that you can be sure that the NFL and the (NFL Players Association) have a tremendous amount of resources that are available to all players,” Goodell continued. “They’re going to be made available to Antonio.

“We want to help get him on the right track and get him in a position where he thinks he can be successful in life. We are confident that can happen… And the first step is making sure that we’re doing everything to help Antonio.”

As every football fan knows by now, the saga of Antonio Brown has been a sad one, as he’s gone from one of the top wideouts in the league to a laughingstock in the past year. From the complete debacle with the Oakland Raiders during training camp, to his short-lived stint with the New England Patriots, to the serious sexual assault allegations, and, finally, to the fallout from an ex-girlfriend — which led to an arrest and court appearance — Roger Goodell seems to understand that the guy has fallen off the deep end and needs help.

The NFL might be all about money, but, in this case, it’s nice to see Goodell become humanized and think about Brown’s long-term mental health and happiness than anything else. Hopefully he follows through on his recent comments and gets the wideout the help he needs — because he’s still only 31 years old.