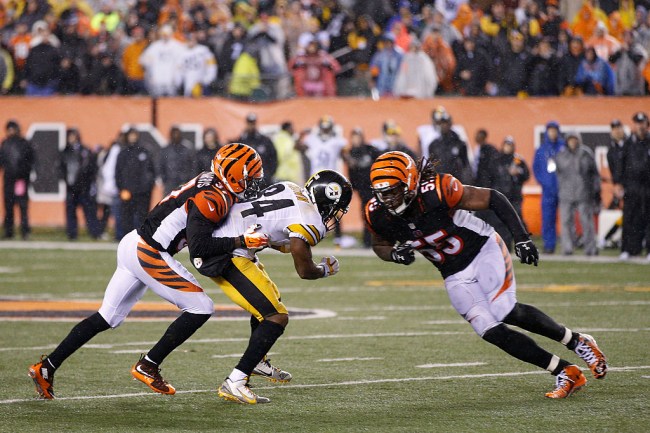 If you were to go back to the year 2016 and looked at the story of Antonio Brown in the NFL it would be a pretty standard one. He’d be a Steelers wide receiver with four 1,000 yards+ receiving seasons under his belt, a Super Bowl loss and that guy who kicked punter Spencer Lanning in the face during a punt return in 2014, but other than that it’s pretty standard stuff.

However, as we all know, things have been far from standard for Brown for quite some time now. The question now is when did things change?

Thanks to an in-depth Twitter thread and theory from @Vountee and discovery by Hot New Hip Hop, we may have an answer. It all goes back to a brutal hit he suffered courtesy of Vontaze Burfict in the 2016 AFC Wild Card game.

If you look at the list of Brown’s incidents outside of the punter kick, things started going downhill right after the 2016 season and specifically this concussion-causing hit. The list is overwhelming, but the 2017 season is clearly when behavioral issues started to arise for the wideout.

I recently stumbled upon a list of AB's incidents ever since he joined the league, which is actually what inspired this thread. I would like to point out he wasn't always a trouble maker, all his problems started in 2017, his only incident before that was kicking that punter lmao pic.twitter.com/4VG2xihOrQ

If you look at 2019 alone, the number of issues involving Brown are astounding. After being traded from Pittsburgh to Oakland, issues immediately began, the first involving his awful blistered feet. This was then followed by him refusing to play because he wanted to wear his old helmet. Prior to all of that, you had him calling out former teammate JuJu Smith-Schuster on Twitter.

While those are pretty intense situations, they’re on the lighter side of issues when it comes to AB. In October of 2018, he tossed furniture off of a 14th-floor hotel balcony. After signing with the New England Patriots he was accused of three separate incidents of sexual assault and rape.

To say things have changed for Brown after the Burfict hit would be an understatement. It’s certainly not the only hard-hit Brown has suffered over the years, but it most definitely stands out. It’s almost as if he’s transformed into a different person.

Things don’t normally change like that within a person on their own, something has to happen and that thing that happened appears to be Burfict’s hit and the concussions Brown suffered that night.

As the Twitter thread points out, the second stage symptoms of CTE are described as ‘memory loss, social instability, impulsive behavior and poor judgement.’ Brown checks all of those boxes.