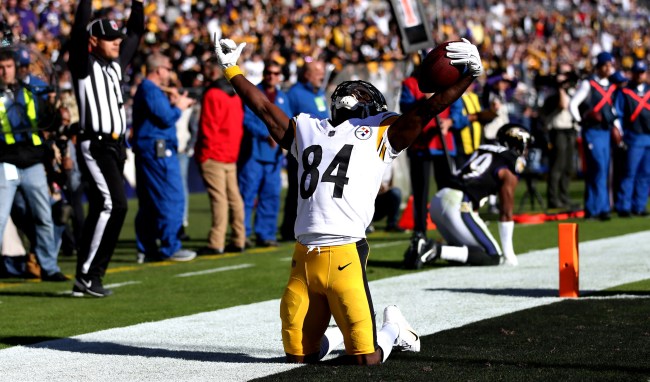 Antonio Brown reportedly finally has a meeting scheduled with the NFL to discuss his many ongoing issues, including being accused of sexual assault.

Since his release by the New England Patriots, Brown has said that he does, does not, does want to play in the NFL.

The 31-year-old wide receiver’s bizarre his social media activity and numerous legal issues have basically made any chance return to the field in 2019 practically impossible, regardless of what he actually wants to do.

Speaking of Brown’s bizarre social media activity, on Sunday he tweeted a poll question asking fans when they would like to see him return to the NFL.

If this was his attempt to show the NFL in advance of his meeting that fans of the league want to see him play again in 2019, it backfired in a big way.

Might have had something to do with him writing on social media last week, “Imagine conforming to a system giving it a 100 percent to see them treat me like this is unfairly ! Making money off my sweat and blood F**k the @nfl I’ll never play in that sh*t treat black people the worse! Clear my name and go f**k your self.”

And, “F**k @nfl I’m going down another path no more making money off my blood and sweat! No more control of my name and body clear my name I am done with it ! So you fantasy f**ks can let it go.”

Brown seems to have forgotten that he was getting paid tens of millions of dollars for his “blood and sweat.”

As of this writing there were more than twice as many people voting for 2020 than 2019 (52.6K to 25.8K), and that doesn’t take into consideration the dozens upon dozens of people who answered with a comment along the lines of “never.”

Do we just comment if we'd rather see you retire at this point?

Bruh, buy a dog and train it to do this. pic.twitter.com/XhIogoC19H

What's the option for never

What do we do if we want neither of those options?

I've never in my life see such an amazingly blessed talent go to waste so badly because of bad character & narcissism. Humble is not in you.

RT this if you think AB needs help.