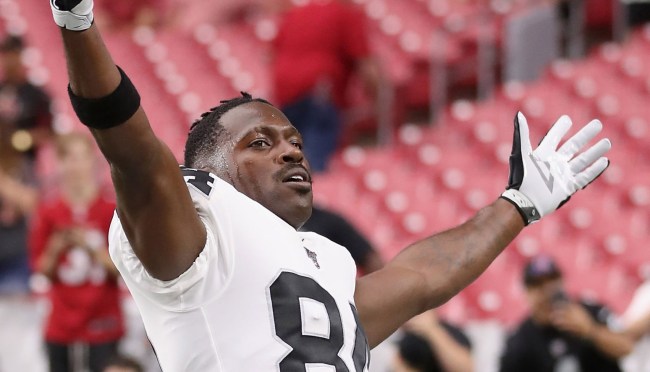 Looks like Terrell Owens’ advice might have worked. ESPN’s Josina Anderson reports Antonio Brown showed up at a Oakland Raiders team meeting on Friday morning and issued an “emotional apology.”

The contents of that apology have yet to be released so it’s unknown if Brown apologized to the team’s general manager Mike Mayock, but according to Anderson, Raiders captains stood with Brown while he delivered his message to the team.

Brown reportedly is on the verge of being suspended by the Raiders over an altercation with Mike Mayock, initiated by Brown, where the receiver reportedly called the G.M. a “cracker” and threatened to hit in the face.

Brown’s agent, Drew Rosenhaus, speaking on ESPN’s Get Up! Friday morning, said, “I’m not going to get into his relationship with Mike Mayock, but I will say that we’re hopeful that that will be a good one, as well. It has been in the past; it can be in the future.”

“There isn’t an issue as far as I’m concerned, outside of what happened a couple days ago at practice,” Rosenhaus added. “Antonio is looking forward to putting all of this stuff behind him. He wants to play football. He wants to have a good relationship with the team. That’s why he signed with them. That’s why he was traded there. Obviously, there’s been a lot of speculation about the foot injury, the helmet. His feet are healthy. He’s got a new helmet.”