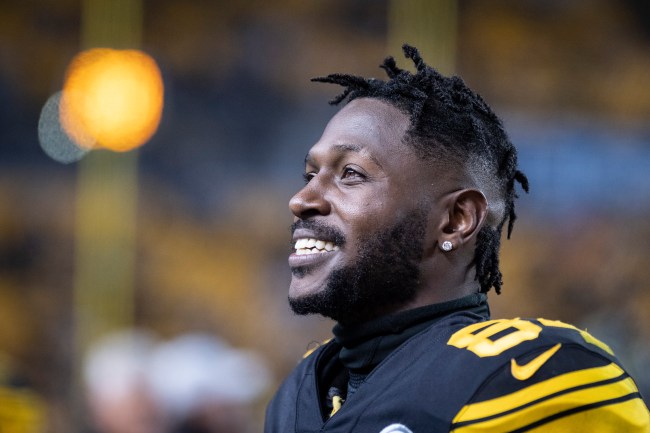 Antonio Brown’s on one, guys. What started out as missing some time with his new Oakland Raiders team because of a freak frostbite accident from a cryotherapy session, turned into the All-Pro wideout threatening to retire because the helmet he prefers to wear, the Schutt AiR Advantage, was no longer approved to be worn by the NFL, which doesn’t certify equipment that’s older than 10 years.

Because of Brown’s extreme threat, there were actually people legit wondering if he’s already suffering from CTE after so many hits to the head throughout his career. That may be a bit of an overreaction, I hope, but the wide receiver did take to Twitter to try and barter with anyone who might have a Schutt AiR Advantage that’s less than 10 years old, which is pretty clever on his part — although it probably won’t lead to him getting one.

Luckily, Antonio Brown came to his senses and realized how ridiculous this all is — and how much cash he would forfeit by retiring — so he’s on his way back to the practice field to join his new Raiders teammates, new helmet and all.

While AB’s being forced to switch equipment under NFL rules after losing his grievance against the league the other day, Schutt, the helmet company who produced Brown’s preferred head protection, explained the very simple reason why the AiR Advantage is no longer being produced. After reading it, one would think Antonio Brown would be happy about changing equipment.

We discontinued making the helmet three years ago because current helmet technology had moved past it. The AiR Advantage was the last varsity helmet made by Schutt that featured traditional foam padding. That material, which is used by most other helmet manufacturers, does not perform as well as the TPU Cushioning we now use in all of our varsity helmets.

TPU (thermoplastic urethane) Cushioning absorbs significantly more impact across a wider variety of temperatures than any other helmet on the field. Third party testing by an independent, certified helmet testing facility has proven that, three years in a row. The AiR Advantage had lived out its useful life as a product and was discontinued when something better was developed.

Just look at that last line, guys, where Schutt actually admits that its own product has “lived out its useful life as a product.” If you were a football player who was in a violent sport nearly everyday of your life, wouldn’t you appreciate the fact that a company like Schutt decided to stop producing a helmet that, you know, didn’t do what it’s intended to do? I’d imagine.

Hopefully Antonio Brown, his new teammates and everyone else complaining about Helmet-gate can move on and just get back to work. Seriously, we live in a world where a grown-ass man was crying about a piece of plastic not meeting safety regulations that could permanently damage his brain, and was actually willing to walk away from millions of dollars if he didn’t get his way. It’s good to see Brown come to his senses a bit.