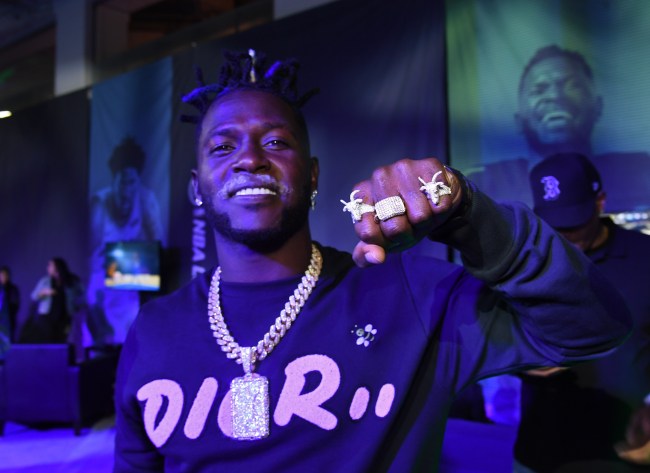 Antonio Brown definitely isn’t worth the money at this point. That’s got to be what Jon Gruden and the Oakland Raiders are thinking as drama continues to circulate around the mercurial wide receiver. Brown, who already made headlines a couple days ago because of his frostbitten feet from a strange cryotherapy accident, has outdone himself today, as rumors swirl that the All-Pro may be calling it quits for good because the league may force him to change his type of helmet. Guys, is something wrong with Antonio Brown?

Since AB loves drama and stirring the narrative, leave it to him to play right into the attention he’s getting from everyone by adding fuel to the fire. Nope, he still hasn’t actually said a damn thing to his team — who have, allegedly, already grown tired of his little act — but, instead, took to Instagram to post a video from the NFL’s top-rated players list for this year, with a cryptic caption that calls out the fact that he may retire. Take a look below.

Notice anything in there rather intriguing? How about the words, “IF I leave…” in the middle of the caption? Yeah, those might be something Raiders’ fans want to pay attention to, because it seems like Antonio Brown is fully playing the spoiled brat card if he doesn’t get his way with this helmet issue.

Obviously, given the fact that Brown is absolutely being insane in his threat to retire, some fans on Twitter are actually convinced that the wide receiver is already suffering side effects from all the hits he’s taken in the league over the years, with a few legit wondering if a vicious hit from Vontaz Burfict a couple years ago is causing this manic kind of behavior. Take a look at some of the tweets below.

Antonio brown has CTE right now and don't know it

All jokes aside, I wouldn’t be surprised if Antonio Brown has some serious CTE from that knockout hit from Burfict. Dude has been a nutcase ever since then.

This thread is staggering.
I’m convinced — as I have been for a long time — the Burfict hit changed Antonio Brown forever. https://t.co/D2ospHcxuR

Antonio Brown took that hit from Vontaze Burfict a few years ago, and his mind ain’t been right since

Nobody knows what the hell is happening to Antonio Brown right now. Not his coach. Not his teammates. Not anyone from his so-called camp. And, with the Raiders currently being featured on Hard Knocks, who knows, maybe Brown’s just showing his flare for the dramatic by adding more intrigue to the series, with everything being a big joke on us. Hey, it’s possible, right?