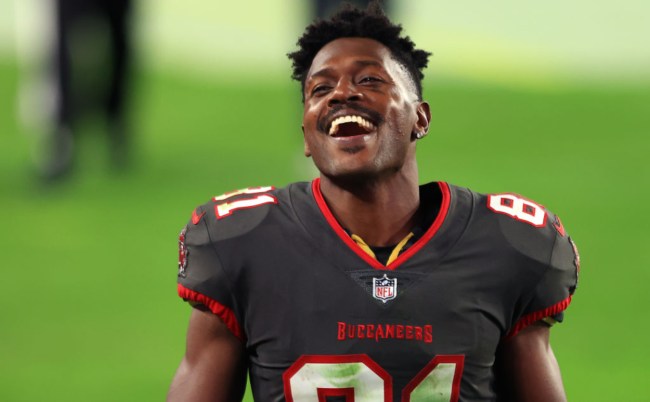 Antonio Brown’s first public response about the ongoing drama involving himself and the Tampa Bay Buccaneers came on ‘The Full Send Podcast‘ on Friday. The now-former Tampa Bay wideout made his feelings about head coach Bruce Arians very clear.

Details of what exactly went on between Brown and Arians before he dramatically left in the middle of the Bucs-Jets game are still hazy. This is because we’re hearing so many different things from Brown, Arians, and reporters alike.

It has become pretty clear that Brown told Bucs coaches he couldn’t go back into the game because he was injured. Arians didn’t appreciate that and reportedly told him to leave, and Brown took that message very literally.

During his appearance on ‘The Full Send Podcast,’ Brown claimed that Arians told him to “get the f-ck out.” Brown then delivered an NSFW message of his own for his former head coach.

“Imagine the guy who you think has your back, who you flew here with to do a mission, and they know your situation, and you get there and you’re battling with him, he tells you to get the f-ck out of there?” said Brown. “I’m an alpha male. If you discriminate on my public image and my name, at that point it’s f-ck you too professionally.”

You have to respect Brown for professionally saying f-ck you to Arians. A professional f-ck you is so much more respectable than a regular f-ck you. Brown calling himself an alpha male is a bold strategy, however.

While Brown’s message for Arians isn’t at all surprising, NFL fans still had quite the response:

that’s not even close to how you use the term “discriminate” 😭😭 https://t.co/QTurqSwDSF

Lmao. Alpha males don't tell you they're alpha males, you look at them and you just know. He's definitely not one of them.

Seems to me that the person who most often "discriminates" against his name and public image is the guy in the mirror, AB.