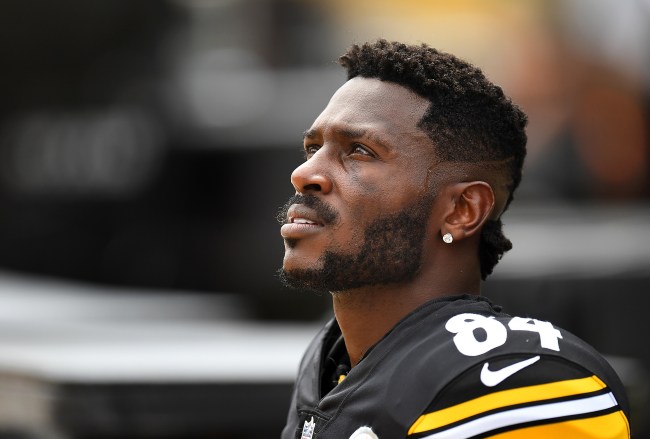 Antonio Brown is as talented a wide receiver as there is in the NFL today, if not the most talented, but his skills tend to get overshadowed by his prima donna personality and antics away from his play on the field. Fans saw that plenty of times during his days with the Pittsburgh Steelers — as Brown could be seen arguing with coaches and throwing tantrums on the sideline, while also showing his true colors by attacking the team before and after they traded him to the Oakland Raiders.

To put it bluntly: Antonio Brown seems to be all about himself, and he doesn’t care about being petty to punk someone else out to prove his own point. That happened recently with the beef he got into with JuJu Smith-Schuster on Twitter, which ended with Brown posting an old DM (since deleted) that showed a message from JuJu while he was still in college at Southern Cal complimenting AB and asking him for tips.

It’s because of all those antics, among others, that former Oakland Raiders head coach Jack Del Rio ripped Antonio Brown, flat out saying that the wide receiver’s going to be “a pain in the ass” playing for the Silver & Black. Speaking to NFL.com‘s Brooke Cersosimo, per SI.com, the former head coach gave an honest assessment of what he thinks the Raiders will have to deal with.

“I love the talent, but [Antonio Brown] has clearly shown that he’s going to be a pain in the ass,” Del Rio said. “He’s a very talented guy and I would love to have him. I would work with him, no problem. If [players] have talent, you tend to tolerate it a little bit, unless it becomes disruptive to your team. He’s going to have to learn that to really help the team. If he continues doing the things he’s been doing, just like he upset the Steelers, he’s going to upset the next team he’s on.”

Del Rio added that he expects Brown will “continue to get chances to be special until his skills deteriorate.”

“That’s when people will get tired of him,” he said.

While Jack Del Rio hasn’t coached in the NFL since being fired by the Raiders in 2017, he’s been around the NFL for decades, and has dealt with mega-watt personalities who have been Hall of Famers, so he’s just giving his honest assessment on Antonio Brown here. Sure, he hands out praise to the wideout, but he’s quick to say that such skills don’t always translate to being a good teammate — and he’s probably right, given Antonio Brown’s history.

With the Oakland Raiders coming off of a four-win season, in rebuilding mode and on the cusp of relocating to Las Vegas in 2020, the ship could sink fast should Antonio Brown not get his and the team starts losing a lot in the 2019 season. If that happens, look out, because the beleaguered wideout could burst like a damn firework on the Fourth of July by throwing the entire franchise under the bus.