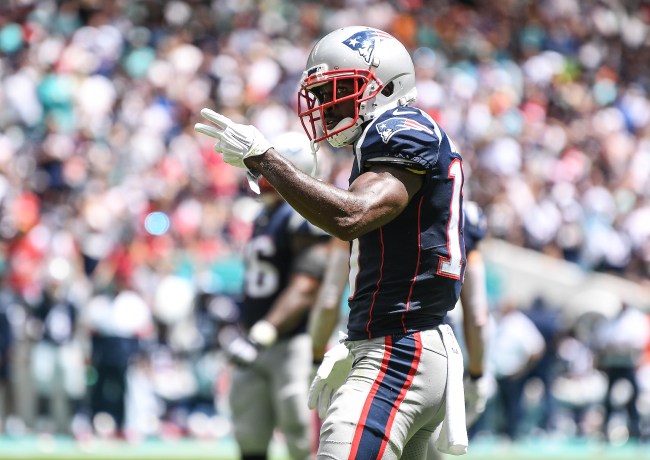 Antonio Brown and the New England Patriots parted ways a few weeks ago after just 12 days together, and, while the All-Pro wide receiver has claimed he’s done with the NFL — then retreated on those comments — he seems to still want to scratch that football itch. In a video the other day, AB sort of mocked the Pats by saying that, if they have to pay him anyway, they might as well sign him. Uh, yeah, that’s probably not going to happen.

Are the Pats really going to add Antonio Brown again? Hell no. But, hey, that hasn’t stopped some fans from creating a petition for the team to do so, with the message being pretty clear as to why the reigning Super Bowl champs should honestly consider the embattled wideout again.

It is clear to Patriots Nation that Tom Brady was excited to have him and upset when he was released. The offense has struggled at times and the 42 year old greatest qb of all time needs a receiver of Brown’s caliber to take the offense to a level we haven’t seen since 2007. Along with that historic defense, there is no telling what this team will be able to accomplish this season.

Antonio Brown should publicly apologize for his tweet about Mr Kraft. AB also needs to make sure all future actions and social media posts adhere to professional standards ie “The Patriots Way.”

Mr. Kraft should allow Bill Belichick to bring him back on a conditional basis. Whatever Coach Belichick and the organization requires in the new deal to feel comfortable allowing him to return to practice and represent the Patriots, those conditions need to be strictly adhered to by Antonio Brown.

We as fans want to see Antonio Brown back on the team and witness the Patriots go 19-0 to make up for the great injustice that occurred at the end of the 07 season.

Uh, yeah, pretty bold argument here. From calling out team owner Robert Kraft to voicing a hilarious reason as to why Antonio Brown should be re-signed — to make up for the injustice of “only” going 18-1 during the 2007 NFL season — this fan clearly seems a little off-center. Thing is, there’s actually been support for the damn petition, with nearly 2,700 of the target 5,000 signing it.

Obviously, this shit’s not going to happen and the Pats aren’t bringing back Antonio Brown. Then again, had you told me that a successful billionaire owner like Kraft would be involved in a massage parlor prostitution scandal, I would’ve called you out. So I guess anything could be possible.