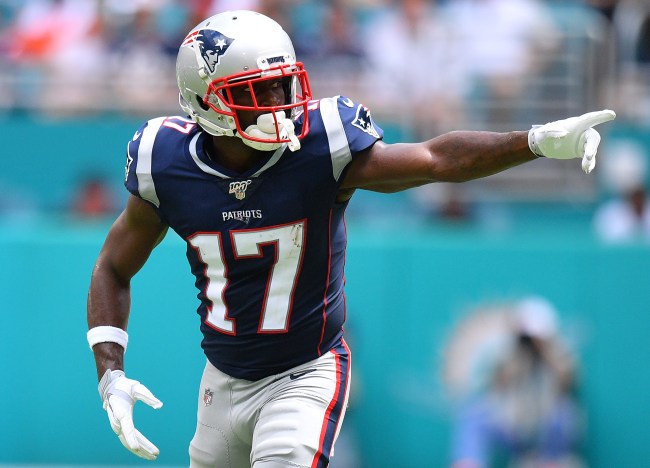 Antonio Brown has had a whirlwind of a summer. After being traded from the Pittsburgh Steelers to the Oakland Raiders in six months ago, the All-Pro wideout wore out his welcome in the Bay Area before he could even suit up for the Silver & Black — thanks to some bizarre behavior like getting frostbite on his feet and then causing drama surrounding his helmet. Once the Raiders released him several weeks ago, the New England Patriots scooped him up. Well, one game, one touchdown and a mere 11 days later, Brown was released by the Pats in the midst of serious sexual assault allegations against him from a number of different women.

Now that Antonio Brown is currently out of the NFL — and, in his own words, done with trying to play for the league ever again — he’s got plans to go back to school and try to get his life in order. Well, personally speaking, I hope that’s the case, because the guy needs serious help given all his episodes the past few months.

As Brown sits back and watches the NFL season like the rest of us after the Patriots released him, some of his former New England teammates are reportedly upset that he’s no longer with the team, with a few in the locker room believing that the wideout shouldn’t have been cut despite all the drama and legal issues he has going on. That’s according to Ian Rapoport of NFL.com, who reported that some Patriots players weren’t thrilled with the organization’s decision to move on from Brown:

The decision to release Brown was led by owner Robert Kraft, sources say, sparked by the text messages that came to light Friday and by the thought that the end was not near. Several players privately voiced their displeasure that the move was made, as Brown had made a positive impression on teammates in a short time. He did things in practice no one else could do.

When Brown first landed in New England, he signed a contract with $10 million guaranteed—$9 million in a signing bonus. While he earned two game checks, the first check for $5 million of his signing bonus was due Monday, Sept. 23. The belief from all parties is that the Patriots will not cut the check, withholding the money instead and forcing Brown to file a grievance for money he believes was fully guaranteed.

This is pretty interesting, because, during Antonio Brown’s entire (brief) tenure with the Patriots, the team kept him bottled up, mostly making him avoid interactions with media — other than one instance the day prior to his release. It seemed like, from the outside, he wasn’t fitting in; but Rapoport’s report seems to counter that, making it seem Brown had the support of some of his teammates.

While New England did their typical “Patriot Way” by playing this all extremely close to the vest, it’ll be interesting to see what happens from here — especially since, as Rapoport mentioned above, the wide receiver’s due some serious cash from the franchise. Get ready for an ugly battle over his contract guarantees.

Meanwhile, according to ESPN’s Adam Schefter, Antonio Brown’s agent, Drew Rosenhaus, claims a few NFL teams have already contacted him about signing his client, so it’ll be interesting to see if that ever comes to fruition as some of the legal issues and Brown’s mind clears a bit.

Antonio Brown’s agent Drew Rosenhaus said tonight he already has had communication “with a few teams that are interested” in his client and that “want information regarding his legal situation and the NFL investigation.”

Antonio Brown doesn’t appear interested in playing football anymore. Whether that’s in the NFL, or in another league — even though the XFL already said today they’re uninterested in him — we’ll have to wait and see if his mind changes. One thing’s for sure, this dude needs some help and clarity before he puts a football helmet back on, because, at just 31 years old, he seems like he’s got something bigger happening with him in his brain than just being a prima donna pro athlete.