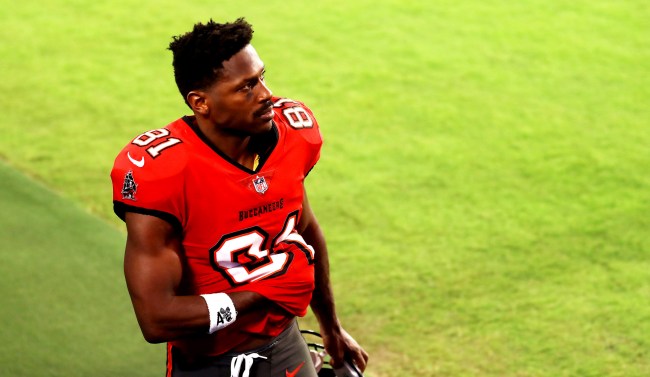 Through the first eight weeks of the NFL season the Tampa Bay Buccaneers were 6-2 and came into Sunday’s game versus their division rival New Orleans Saints having won 6 of their last 7.

Of course, the big news heading into the weekend for the Bucs was the fact that the team would see the debut of recently signed wide receiver Antonio Brown.

The Saints ended up crushing the Buccaneers 38 to 3 (winning the season series 2-0), while Tom Brady had by far his worst game of the season going 22 of 39 for 209 yards, with zero touchdowns and three interceptions.

Antonio Brown was a complete non-factor, catching three passes for 31 yards, unless you count the time Brady appeared to blame AB for causing his second interception of the game, that is.

This interaction between Brady and Brown led to numerous fans joking about Brown’s current living situation.

Tom Brady and Antonio Brown are going to have an awkward ride home after this game. 😬

After the game, Brady told the media, “There’s no excuses for what it is. It’s a poor performance by a team that has a lot ahead of it.”

Bucs head coach Bruce Arians was slightly less diplomatic, saying, “They kicked our a** in every phase.”

However, for NFL fans who don’t like Tom Brady and/or Antonio Brown, and there is no shortage of both, the game really couldn’t have gone much better, resulting in a plethora of hilrious memes.

Antonio Brown lacing them up for his first game back… pic.twitter.com/Sah1z3DXXk

The media: The Bucs got Antonio Brown so now they’re unbeatable

Antonio Brown after destroying yet another locker room pic.twitter.com/uSCPmqrHXo

"Join us if you want to win a super bowl"
Antonio Brown after the game last night pic.twitter.com/pWq1fjucBj

AB looking back when he’s open to see Brady dumped it off again pic.twitter.com/J4qyWzHxiQ

Antonio Brown to the Buccaneers at halftime pic.twitter.com/QlpxlWtYYV

Antonio Brown after catching a random pass while being down by 31 pic.twitter.com/B01qshJXFB

“Remind me why the hell we signed Antonio Brown again?” pic.twitter.com/80hBY4UHEC

The #Buccaneers GM said there was "no risk" in signing Antonio Brown. #Hahahaaaaa #NFL pic.twitter.com/HaRWrSvID1