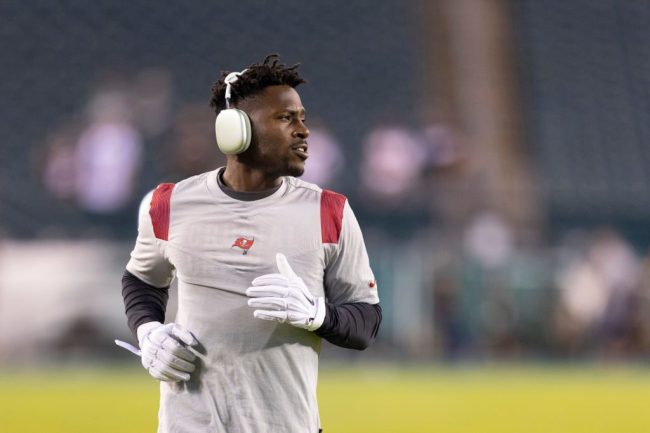 The drama between Antonio Brown and the Tampa Bay Buccaneers is far from over. He trolled the Bucs after they were eliminated from the playoffs this weekend. He has continued to talk about the team in interviews.

Now, in an appearance on “Real Sports with Bryant Gumbel”, Antonio Brown has made a wild accusation about the Tampa Bay Buccaneers.

ANTONIO BROWN: Yeah, these guys at Tampa Bay Bucs tried to make an agreement with me to give me $200,000 to go to the crazy house so these guys could look like they know what they’re talking about.
BRYANT GUMBEL: They offered you $200,000 for what?
SEAN BURSTYN: The off– the offer was Antonio would basically sit on the sidelines, go on some list– and commit himself to some form of intensive mental health treatment. And we were specifically told, in writing, by the general manager, twice, “Don’t spin this any other way.”

It’s a pretty huge accusation from Brown and the possibility of a defamation lawsuit was even brought up as a result of the revelation. If the accusation proves to be true, it would seem there are two explanations for what happened here.

Either the Tampa Bay Buccaneers were genuinely concerned about the mental health of one of their players or they were trying to cover for firing Antonio Brown mid-game over an injury. Unfortunately, it will likely be some time before we know the full story of what really happened on Antonio Brown’s way out of Tampa.

Whatever comes of this latest accusation, it is abundantly clear that Antonio Brown is nowhere near done with the Tampa Bay Buccaneers.