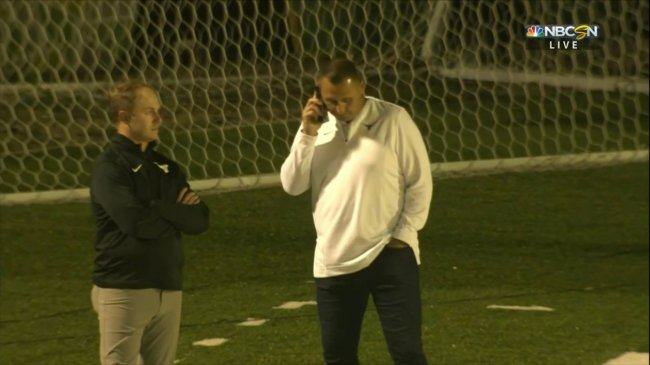 Up until Thursday night, Arch Manning had been as close to perfect as perfect can get. He has shown his ability to throw the ball deep, run through defenders, and even punted during the preseason.

Despite his early season success, as Isidore Newman faced St. Charles Catholic, it was a different narrative. Manning struggled and the Greenies suffered their first loss of the season on national television.

To make matters worse, Manning’s difficult night came in front of Texas head coach Steve Sarkisian— although there is no chance that Thursday affected the Longhorn staff’s pursuit of Eli and Peyton’s nephew.

Even though he had a disappointing evening, the nation’s top recruit in the Class of 2023 still showed flashes of the insane talent that he is.

He showed off his speed on a few occasions throughout the night.

His best throw of the night came in the second quarter.

Arch makes his first big play of the night on the run, but Newman is held to a field goal attempt from the 30 that they miss.

And then, on Newman’s only touchdown of the night, Manning showed off his accuracy in the second half.

St. Charles punts it to Newman, which finally gets on the scoreboard on the back of 17 yard Arch Manning scramble and 3 big completions.

Here’s the TD throw that capped off the drive. 7-6 Newman after the extra point is good. pic.twitter.com/B6s7boZiqC

However, with the good came quite a bit of not so good. St. Charles’ defense gave Newman’s offense fits all night and Manning completed only 14 of his 30 pass attempts for 130 yards and one touchdown. He also threw an interception and was sacked twice.

St. Charles punts it to Newman, which finally gets on the scoreboard on the back of 17 yard Arch Manning scramble and 3 big completions.

Here’s the TD throw that capped off the drive. 7-6 Newman after the extra point is good. pic.twitter.com/B6s7boZiqC

Even with all of the problems, Manning and the Greenies had a chance to win the game in the closing moments. Newman got the ball back with under a minute left and faced a five-point deficit.

On the proceeding drive, Manning was sacked once and threw four incomplete passes. The 12-7 score held and Newman suffered its first loss.

Manning showed his incredible arm strength by flicking a ball to the end zone, on the rollout, with a defender on his back to close out the game.

Here was the final play:

Comets score a touchdown with under a minute left, and Arch can’t lead Newman on a game winning drive.

A holding call on the prior possession also stopped Newman from getting a first down and icing the game. @theadvertiser pic.twitter.com/QFhMD5Kx1r

Thursday night’s loss was his worst game of the season, if not his three-year high school career. Nevertheless, everybody knows what an insane talent that the 6-foot-3, 212-pound junior is going to be. Sarkisian got to see Manning at his lowest, and yet, he still showed flashes of all-time greatness.

Perhaps Sark being in attendance for a loss is an omen? Should he take Texas off of his list?!

Newman will face Tampa Bay’s Berkeley Prep at home on Friday on ESPNU. It’s hard to imagine that Manning won’t bounce back.