Arian Foster Goes Next Level In Bashing The Texans, Saying Franchise Acts Like Players Should ‘Do What We Say’ 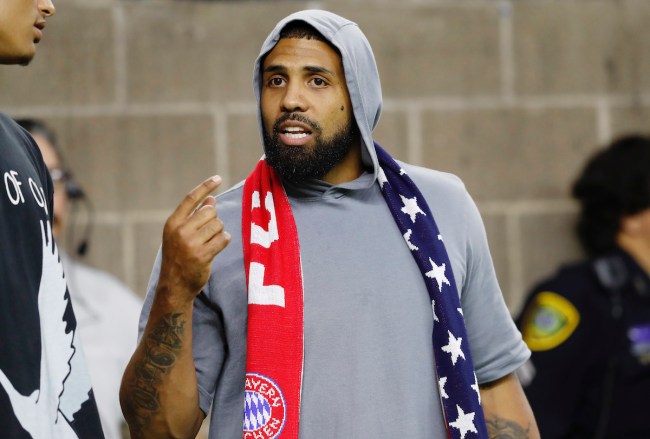 During his heyday, Arian Foster was an absolute stud as an NFL running back, with the former undrafted player becoming a diamond in the rough for the Houston Texans when they signed him in 2009. Not only did Foster end up making four Pro Bowls during his career, but he also led the league in rushing in 2010, and in rushing touchdowns during the 2010 and 2012 campaigns. When all was said and done, Foster left Houston as the all-time leading rusher in the history of the Texans’ franchise, finishing with 6,472 yards and 54 rushing touchdowns.

However, since leaving the NFL at age 30 in 2016, the former bulldozing runner has snagged some interesting headlines, like when he said he could fight a wolf one-on-one, and how he nearly fought a bunch of college kids outside of a hot dog stand. He recently got attention when he agreed with fellow former Texans great Andre Johnson about current quarterback Deshaun Watson being disrespected by the franchise, and encouraging the superstar to stand his ground to force a trade. Here’s what Foster tweeted in mid-January.

While that seems pretty tame, Arian Foster gave some full-blown, next level criticism recently as a guest on The Gems and Juice podcast. Talking about his time with the Texans, the former running back didn’t hold back in describing how the franchise straight-up didn’t care about players.

“I do know that the organization had their troubles bringing in free agents, which I never really understood,” Foster said during an appearance on The Gems and Juice podcast. “They have their struggles in communicating with players. I’ve always thought this about the NFL in general, but my experience with Houston is that they really didn’t give a fuck about how you felt and what you said. It was like ‘you do what we say.’ And that’s another variable as to why I was like disassociated from the wins and losses shit.

“It was like, ya’ll don’t give a fuck about my input. Maybe three coaches — tops — played at that level, [the others] just [have] been around the game,” Foster continued. “And so how the fuck can you not have input from people doing it at a high level, who are in it? I never understood that shit. And so once you realize that you’re just a chess piece, then for me, it was just like, ‘alright, I’m just going to do what I can…I’m gonna play hard… do my thing… take care of my dues… but I’m here for a purpose.'”

The Houston Texans have long-been owned by the McNair family, so the same leadership dealing with this Deshaun Watson situation are the ones who made the decisions when Foster was playing. Whether this is all true or partly true, it’s a serious problem for the McNair’s. As a business owner, especially one running a pro sports team, imagine if this is the perception that your employees have of you. Yikes.

With Deshaun Watson reportedly campaigning to get traded at some point this offseason from the Texans, things like this from Arian Foster definitely don’t help the team’s chances of repairing the relationship with its star quarterback. Sure, Foster is retired and hasn’t played for the organization since 2015, but guys talk, and Watson certainly hears the whispers about how former all-time greats of the team have felt disrespected by ownership. Just chalk this up as another reason why it’s almost certain the Pro Bowl signal-caller gets shipped out of town in the coming months.