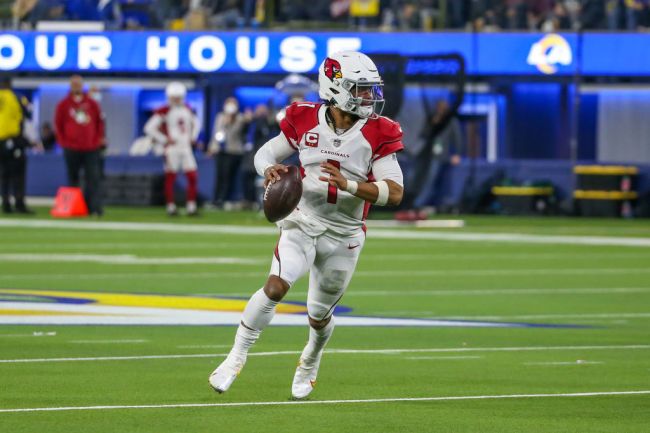 Just a few years into his NFL career, Kyler Murray has already established himself as one of the NFL’s most dynamic quarterbacks. The combination of his mobility and arm strength are already causing opposing defenses plenty of issues.

While he has impressed so far in his career, one Arizona Cardinals legend made a claim about him yesterday that may be taking the praise just a bit too far.

Yesterday, former Cardinals receiver Larry Fitzgerald spoke to NFL.com’s Grant Gordon and claimed that there is nobody in the game as talented as Kyler Murray.

There's nobody "as talented as" Kyler Murray, Larry Fitzgerald says: "He’s a guy that everybody around the league has to prepare differently for."https://t.co/glL9NKbW11 pic.twitter.com/4gdoGU3DFe

“Obviously, the schedule’s really tough early in the season. I know they’re going to be without Hop, but I know Kyler has the ability and the fortitude to be able to lift this team up.”

Last season, it wasn’t the early part of the season that was the issue. The team started 7-0, but went 4-6 in their last 10 games of the year. Given Kliff Kingsbury’s history, the real question won’t be whether or not Murray can lift them early in the year, but whether he can keep them afloat in the 2nd half of the year.

More importantly, Fitzgerald had a bold claim about Murray’s talents.

“There’s nobody in the game as talented as, as diverse an array of abilities in terms of his athleticism, his ability to throw the ball going left or right. He’s immensely talented. He’s a guy that everybody around the league has to prepare differently for. You bring in [Brown]; Zach Ertz is now coming into his second year; (and he’s) better acclimated with the system. James Conner is fully healthy going back into the year. I really like where they are positioned.”

There are a few QBs around the league who might disagree, but Murray certainly does create issues for opposing defenses with his combination of speed and arm strength.

With Hollywood Brown now stretching opposing defenses for the Cardinals, Murray should get plenty of opportunities to show off his talents next season.