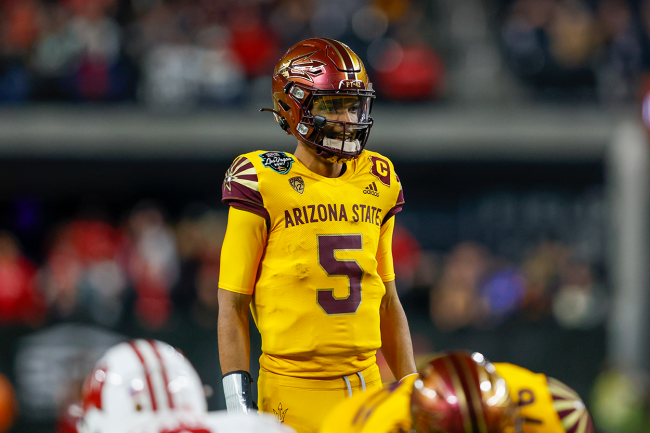 Arizona State starting quarterback Jayden Daniels is entering the transfer portal and leaving the program, as announced on Thursday. It does not seem like his presence will be missed by his teammates.

Not long after Daniels’ decision was made public, a video surfaced from the locker room in Tempe and it got nasty in a hurry.

In the video, filmed by defensive linemen Travez Moore, a group of Sun Devils are gathered around Daniels’ locker. They appear to be going through his personal belongings and trashing his space.

In the background, a voice that is presumably Moore’s can be heard saying:

That wasn’t quite the language that was used, with the real video including explicit words.

It doesn’t look like Jayden Daniels ASU teammates are real pleased with his decision to enter the transfer portal. pic.twitter.com/eElvZSErkv

There are two problems with this video and it isn’t clear what is worse.

First of all, the actual action of cleaning out Daniels’ locker and rummaging through his stuff is truly unacceptable. To then blast what they are doing on social media is just horrible.

Clearly, for whatever reason, Daniels’ exit has caused some pretty visceral reactions.

Perhaps some of the animosity is the timing of the decision.

Daniels has had a few months to enter the portal after the 2021 regular season. Maybe his teammates didn’t like that he led them on?

Additionally, Daniels entering the transfer portal comes as Arizona State head coach Herm Edwards and his program are currently under investigation by the NCAA. The investigation stems from alleged recruiting violations that led several staff members to resign or be fired in recent months.

Perhaps his teammates feel as though he is abandoning the program?

There is also the thought that Daniels was just disliked. Maybe his teammates were not a fan of his from the get-go?

Whatever the reason, what was blasted on Instagram is simply unacceptable. It will be curious to see what, if any, ramifications come from the video.