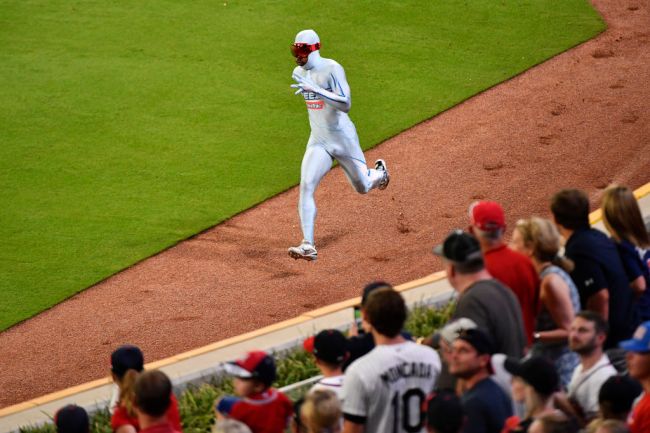 Baseball is a slow game and Major League teams have gotten creative with how to keep fans entertained between innings. The Nationals have president mascots compete in a foot race, the Yankees have a virtual subway race and the Brewers race sausages, among others. In Atlanta, however, the Braves have the most electric in-game entertainment of them all.

In June 2017, the organization began the “Beat the Freeze” race from foul pole to foul pole— around 160 meters. One lucky fan is chosen to race across the outfield warning track against a man wearing a bodysuit and goggles. On the field, his name is “The Freeze,” but in real life his name is Nigel Talton. He is a security guard and member of the Braves’ grounds crew and just so happens to be a former college sprinter. The Freeze ran at Kennesaw State and notched a 4.28-second 40-yard-dash in 2011.

He’s ridiculously fast and typically blows by his opponents with room to spare. It doesn’t matter that the fans get a head start.

Talton paints the baseline before the game and then heads off to the outfield for his now-famous moment. He has lost before but the losses are rare and typically come to fellow athletes, or someone of the like.

A victory for the ages.

On Thursday, the narrative flipped on its head. Wearing a polo shirt, shorts with an in-seam no longer than nine inches, and a pair of high-top Chuck Berrys, the challenger didn’t look like he would give The Freeze a run for his money. However, what went down made the improbable possible.

The Freeze’s challenger got a five-second (ish) head start and was just beyond the bullpen when Talton took off. The Freeze closed the gap some through the first stretch, but it wasn’t until the centerfield mark when he turned on the jets and started closing in.

By the three-quarters mark, the challenger was gassed and The Freeze was on his tail. Looking back over his shoulders, he dug deep and finished strong to win by a step. And by a step, it was literally a step. But a step nonetheless.

He's the Freeze, but this kid had ice in his veins. 🥶 pic.twitter.com/FHHoQMZOkz

Had The Freeze left from the blocks at after a four-second head start, it was over. That wasn’t the case and the converse-wearing challenger was PUMPED.