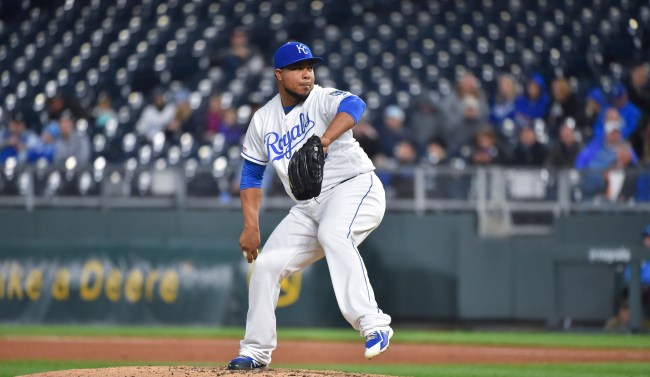 See all those people dressed up in empty seat suits in the photo above? That picture was taken on Monday, April 29th for the opening game of the Kansas City Royals’ series vs. the Tampa Bay Rays at Kauffman Stadium. There were “reportedly” 11,744 fans in attendance at that game. (They must have all been sitting behind home plate.)

On Wednesday, for game three of the series with the Rays, the Royals probably wish they had 11,744 fans, because from the looks of things, there is almost no one in the stadium.

I know that it's a Wednesday afternoon during the school year in a city that doesn't draw well against a team that doesn't attract a road crowd. But I've never seen so few people at a major league game as the one just starting now between Kansas City and Tampa Bay. pic.twitter.com/z3QUdfdWiT

It’s an unscheduled day game as part of a DH, and a 12:15 local time start at that, and it’s 60 degrees and kinda damp …
But, still, there’s nobody here for #Rays and #Royals … pic.twitter.com/1aSVnozI6y

Only two teams in MLB are averaging less fans at home games than Kansas City, and unfortunately one of them is the team they are playing: Tampa Bay. (Miami is the other team. Well done, Jetes.)

Things have gotten so bad in K.C. this year that the Kansas City Star actually had this headline recently: “If a Royals game happens and nobody’s there, what does it mean for the future?”

If a Royals game happens and nobody’s there, what does it mean for the future? https://t.co/VXGFVWeLgc

The Royals didn’t even sell out their home opener. In fact, it was the lowest attendance for a season opener in Kansas City since the first game after the 1994 strike.

If the team doesn’t improve on their current .310 winning percentage, what kind of attendance can they expect at home games in say, August or September? Probably a lot more of this…

Guess the #Rays & #Royals forgot to tell the fans that there’s a game this afternoon, attendance looks stellar pic.twitter.com/V93VB8a7Nx

Things people should know:
1) This game is an unscheduled midweek noon makeup game
2) The visiting team is the #Rays, who draw poorly on the road
3) Weather is lousy
4) This stadium is near nothing
5) Tomorrow is School Day & parents prolly planned their day off for that. #Royals pic.twitter.com/01O3Nr7RsZ