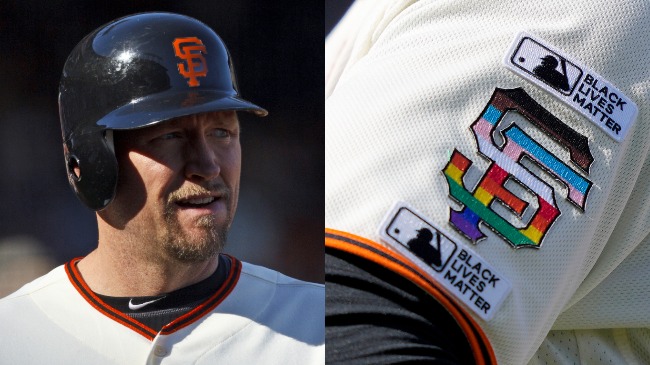 Stop me if you’ve heard this before but Aubrey Huff is sitting behind a computer screen in an extra medium American Alpha t-shirt, gas station sunglasses, and his wife’s underwear embarking on his exhausting quest to exterminate beta males.

The former San Francisco Giant begun transitioning from his Vaccinations Are For Sissies campaign to getting Big Mad about his former team’s decision to incorporate pride colors on their on-field uniforms to honor the LGBTQ+ community and pride celebrations in the month of June.

The team added the 11 colors of the new Pride logo are “emblematic of the Progress Pride Flag and signify inclusion and progression with the six pride colors.” Those 11 colors are red for life, orange for healing, yellow for sunlight, green for nature, blue for serenity, purple for spirit, black and brown to recognize LGBTQ+ people of color, and light blue, pink and white to recognize people who are transgender.

Huff revealed his disdain for the decision in a series of tweets that also took aim at the Little League for promoting gay pride.

One would expect this from the “woke” ⁦@SFGiants⁩. All you conservative players wear it with pride! https://t.co/Qg3ownQTPL

When @LittleLeague is promoting gay pride you know we are living in some fucked up times.

You want to be gay as an adult…go fucking nuts! But don’t subject innocent kids to this bullshit!

Want to be a woke pussy???….FINE….leave the kids innocence alone!

Please for the love of God..MAKE IT STOP! @MLB 🤮 pic.twitter.com/WJKihLFIwT

Franklin teamed up with the @SFGiants to wear these super cute limp wrist bands. Wear them with pride girlfriend. pic.twitter.com/Rh56oPl7Gg

For the record…I don’t give a damn if you’re gay. Go nuts.

I just hate the fact that the gay lifestyle is being crammed down societies throats….confusing, & indoctrinating our youth.

And it’s maddening that big corporations like @MLB swallow the load.

“Swallow the load.” Seems like a nice place to shelf this.