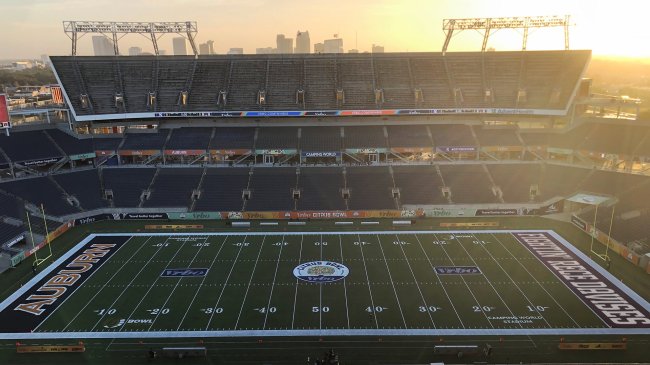 Auburn and Northwestern will square off in the Citrus Bowl on January 1, 2021 and the bowl’s official Twitter account had some fun with the Wildcats leading up to the game. Prior to one of Northwestern’s biggest wins of the season over Wisconsin in November, head coach Pat Fitzgerald’s team received some extra motivational fuel.

While discussing the game on a preview show, ESPN’s Joey Galloway knocked the Wildcats’ chances of reaching the top of the Big Ten by calling their players “a bunch of Rece Davises.” The dig downplayed their athleticism by comparing them to one of Galloway’s fellow ESPN anchors, a 55-year-old Davis. Northwestern ran with it after beating Wisconsin and have embraced the nickname as the season has continued.

Michigan State upset the bunch of Rece Davises in the following week and Ohio State continued its undefeated season with a win in the Big Ten Championship, which resulted in Northwestern receiving an invitation to the Citrus Bowl. The bowl game tweeted out a mock-up of the game’s end zones on Thursday that included the nickname and the school was extremely receptive. On the morning of the game, the bowl responded with a very convincing photoshop of the field as the sun rose. In place of the school’s name, the end zone read “Fightin’ Rece Davises.”

ok we stayed up all night but we think we got this right pic.twitter.com/kkLvNyhNpJ

Unfortunately, the photoshop was just that. Instead of “Fightin’ Rece Davises,” the Northwestern end zone read, well, “Northwestern.”

Good morning from Camping World Stadium. Woke up at the crack of dawn and made the drive up from Miami this morning. Auburn and Northwestern kick off in about two hours. pic.twitter.com/C0mbokfdj9

The Wildcats will look to cap off one of the best seasons in recent history against the Tigers, who enter at 6-4. Auburn will play without head coach Gus Malzahn, who was fired following the regular season finale, and defensive coordinator Kevin Steele will serve as the interim. Steele did not land the team’s open position, as Bryan Harsin was hired to lead the program beginning next season.