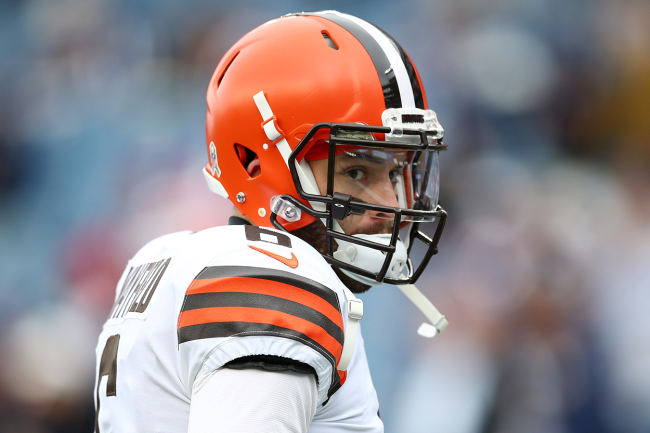 The Cleveland Browns put themselves in a sticky situation. After trading for a quarterback with two dozen civil lawsuits pending against him (20 of 24 have been settled), it does not seem like Deshaun Watson will be allowed to play this fall.

Watson begins his disciplinary hearing with the NFL today. He is expected to receive an indefinite suspension that would be at least one year.

There is a lot of time for things to change, and the punishment is not written in stone. However, the NFL is reportedly preparing to argue that Watson should be off of the field for at least 365 days.

That leaves Cleveland without a clear QB1 for 2022. As things currently stand, the team’s plans at quarterback appear to be pretty clear.

There is another option on the table and it has not been ruled completely out.

Baker Mayfield is technically still on the team. He has asked to be traded, the Browns excused him from mandatory minicamp, and there is a lot of tension between the two parties. Cleveland chose to trade for Watson despite Mayfield still being on the roster and that, understandably, pissed him off.

It does not seem like Mayfield will take a single snap for the Browns this year, but he is leaving the door open.

On Tuesday, as Watson prepared for his hearing, Mayfield hosted a youth camp. There is irony to that.

There is beautiful irony in Baker Mayfield hosting a youth football camp in Norman today while the 'adult' the Browns so desired attends a hearing in which he's expected to be suspended indefinitely by the NFL.

It's at the very least funny. Not the actions, the irony.

Baker Mayfield spoke to the media at his camp and was asked about his future in Ohio.

While it seems rather unlikely, Mayfield left the door open for a return.

He said that Cleveland would have to begin the reconciliation process, which has not yet happened. As for right now, the former Heisman Trophy winner has moved on and is looking toward the future, presumably with a new team.

Baker Mayfield answered the question everyone wants to know: If DeShaun Watson is suspended, could he return to Cleveland in 2022? Here's his answer from his youth camp Tuesday in Norman. (via @CareyAMurdock, @Eddie_Rado) pic.twitter.com/ASNY5b8kdO

It would be a big shock if the Browns could convince Mayfield to return to the team this fall, but it’s not entirely unthinkable. There is a lot of money involved with the entire situation and it could play a role. It just doesn’t seem like it’s going to happen, and Mayfield is not chomping at the bit to return to the organization that shoved him aside.