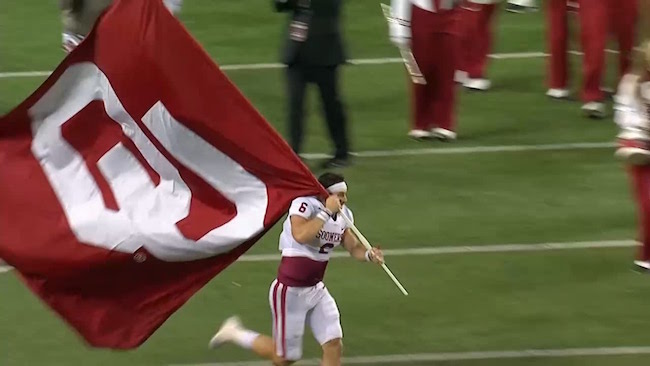 On Saturday, Stanford running back Bryce Love and Louisville quarterback Lamar Jackson will don their sharpest outfits and head to a ballroom in the Marriott Marquis in the heart of Time Square in New York City. Upon arrival, they will be forced to sit front and center alongside fellow nominee Baker Mayfield for an unnecessarily long amount of time before their hopes and dreams are crushed when the Oklahoma QB is called on stage to accept the Heisman Trophy.

Mayfield has managed to throw for 4,340 yards and 41 touchdowns despite being suspended for a staggering two plays after grabbing his crotch during a game against Kansas (an impossibly hard decision that reduced Sooners coach Lincoln Riley to tears). However, that’s far from the only incident perpetrated by Mayfield that managed to drum up some controversy this year.

After upsetting Ohio State in September, Mayfield grabbed a giant OU flag and headed to the middle of the opponent’s home turf, where he planted it with such force that I’m surprised the field didn’t open up like the one in The Dark Knight Rises. He went on to apologize for the incident before going on to say he didn’t regret it at all, and while he initially caught some flack from some Sooners fans, it appears there are plenty of people out there who support his decision— and then some.

Oklahoma has had enough Heisman winners over the course of its history to set aside an area on campus where it places statues of every person who’s taken the prize home, and it’s a virtual certainty that Mayfield will be immortalized there. According to SB Nation, one forward-thinking faction of supporters is determined to ensure the OSU incident won’t soon be forgotten.

One Oklahoma fan has started a petition to get Oklahoma to commission a statue depicting Mayfield planting the flag. As of this writing, it has almost 4,700 supporters. While there’s as much of a chance that the school agrees to do this as there is Mayfield losing this year’s Heisman, I can’t help but respect the hustle.