Cleveland Browns QB Baker Mayfield Mic’d Up During His NFL Debut: ‘This is Kinda Fun!’ 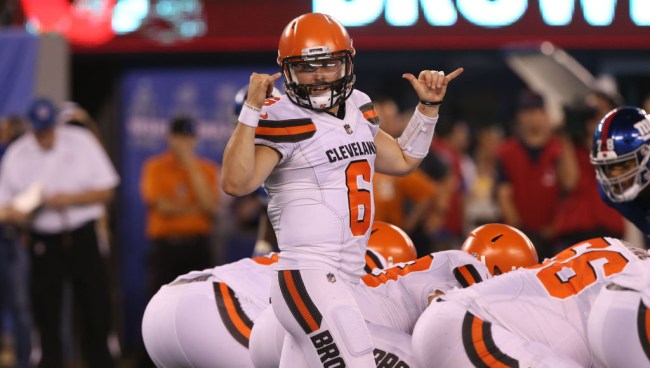 The Baker Mayfield experience has officially begun in the NFL as the 2017 Heisman Trophy winner made his professional debut in a 20 to 10 win over the Giants in the Cleveland Browns’ preseason opener.

Thanks to that impressive debut Browns fans, and Mayfield himself, are definitely feeling it these days. Especially with the team being featured on this year’s Hard Knocks on HBO.

Speaking of Hard Knocks, Mayfield’s NFL debut will obviously be one of the main focuses of episode two of the series. Which is why he was mic’d up, leading to him saying a phrase that Browns fans probably hope won’t come back to haunt them, “This is kinda fun, I’ll be honest.”

Despite Mayfield’s impressive start, the Browns are still strongly supporting Tyrod Taylor as the team’s number one QB, reports Cleveland.com.

Browns quarterbacks coach Ken Zampese has heard all of the Baker Mayfield hype in the wake of his sensational debut in the preseason opener against the Giants, but made it clear that nothing’s changed.

“I think you said the right words, national hype” said Zampese. “We have our plan, we’re sticking to it and when it changes we’ll all know.”

Zampese reiterated what the organization have been saying since they drafted Mayfield No. 1 overall: that he’ll wait his turn behind Taylor, an eighth-year pro and two-time Pro Bowler.

“He’s our guy, and that’s what he is,” said Zampese. “And to keep bringing it up is the only reason why anybody put a cloud in anybody’s head. So let’s get on with him being the guy and let’s get on to playing and winning and doing what we’re supposed to do and what we’re here for.”

None of that is stopping beleagured Browns fans from drinking the Baker Mayfield Kool-Aid. At least based on these comments by some of them on Reddit.

“Yessssssssss I’m so happy we get to have his rookie year documented. We can watch the begging of a legend.”

“I was chuckling with excitement. Damn! It feels good to be a Browns fan right now.”