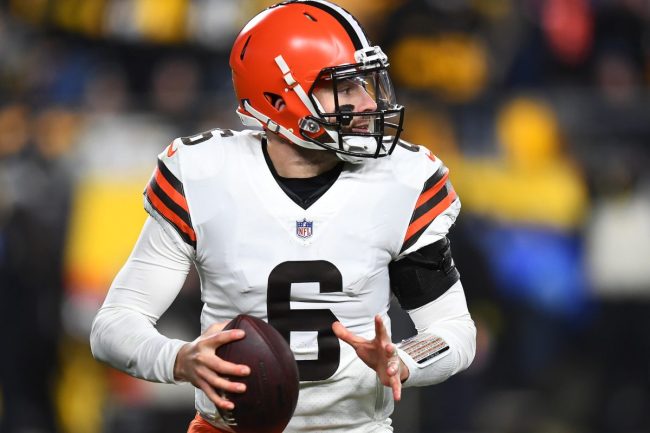 Baker Mayfield has made a decision on which number he’ll sport with his new team, the Carolina Panthers. The passer will wear No. 6 in Charlotte, continuing a trend that’s dated back to his days in college.

Mayfield donned that No. 6 while playing for the Texas Tech Red Raiders as a freshman. He kept it on his chest as he made his way to Norman, where he won a Heisman trophy with the Oklahoma Sooners. Mayfield kept the tradition going in the NFL after being selected first overall by the Browns.

While a change in scenery is soon coming, some things will remain the same.

Mayfield said in an interview Tuesday that he’s had conversations with Panthers’ punter Johnny Hekker, who currently wears No. 6, regarding a number swap. The two have reportedly come to an agreement.

Hekker, who also just arrived in Carolina, bought the number from PJ Walker this offseason. It was short lived, but I’m sure the punter got a nice consolation prize for the trade.

When asked about the purchase, Baker Mayfield said that it was a number very special to him.

“Made a deal with Johnny [Hekker]. When it comes to a 4x All-Pro, I had to ask permission. 6 is special to me. It was the number I was given as a walk on. It symbolizes my story.”

The number swap had many NFL fans talking on social media.

Fans were quick to comment on the news on Twitter. Take a look at the immediate reaction.

Some say that he needs to drop the underdog narrative since he’s won a Heisman and been a No. 1 overall pick.

He was the number 1 draft pick. Why he still on that 😂 https://t.co/4HdIdVZnIJ

you were literally the #1 pick in the draft, you’re not an underdog. https://t.co/0OAlzWtiEb

Bud wanna be the underdog so bad https://t.co/HOysu3nZZ3

The chip is back on his shoulder guys https://t.co/OkJ2BzpeZF

Others, though, were happy to see Mayfield wind up in the No. 6 jersey with his new team.

I’m all in on a Baker redemption year https://t.co/xQenf9CC05

And many were quick to congratulate Johnny Hekker on a quick offseason payday, too.

Mayfield will suit up in that No. 6 when the Panthers host the Browns in week one. We’ll see if it brings him any success in Carolina.